I have always maintained that DAP supremo Lim Kit Siang is an opportunist who never shy away from exploiting every issue available, including those which affect the people's emotion for political mileage .

I first experienced Kit Siang's hypocritical ways first hand during the campaign for Gelang Patah in the last general election.

He accused his opponent, the then Johor Menteri Besar Datuk Abdul Ghani Othman of racialist tactics while it was actually he himself who took full advantage of the Chinese community's sentiments at that time to win in the constituency.

I was therefore not surprised at all when he tried to exploit the murder of Sarawak businessman Bernard Then by his kidnappers, believed to be Filipino Abu Sayaff terrorists.

Then had been held hostage for six month before his murder.

Kit Siang, instead of just focusing on the crime had tried to link the murder to the leadership of PM DS Najib Razak by putting the blame on his administration.

The way I see it, the DAP supremo was once again playing on people's emotion to discredit his political opponent.

It's the same tactic used by DAP when it exploited to the maximum the death of DAP staff Teoh Beng Hock by blaming it on the BN government.

was undoubtedly one of DAP's most potent weapons as far as winning the votes of the Chinese community in the 2013 general election.

I find it distasteful for Kit Siang to exploit Then's death in such a manner.

I believe the French will roundly reject such an opportunistic exploitation if any of their politicians ever attempted it.

Similarly, I hope Malaysians will recognise the vile attempt by Kit Siang to earn political milage by blaming Then's murder on Najib and the authorities.

Ever since the spate of kidnappings in the waters of Sabah by Filipino criminals and terror elements, our authorities have been working hard to secure the victims' safety and release.

There have been quite a number of  cases where they managed to do so.

The authorities have  also stepped up security measures along the Sabah maritime border with the Philipines.

This was to prevent the repeat of the

We lost 10 members of our security personnel while 66 of the terrorists were killed.

I remember members of the opposition ridiculing the authorities' effort in handling the terrorists so that they can gain some political milage out of it.

Earlier today I received this photo from a friend.

It shows opposition leader Nurul Izzah Anwar of PKR enjoying a good time with Princess Jacel H.Kiram-Hasan, the daughter of the late "sultan" who initiated the Lahat Datu tragedy 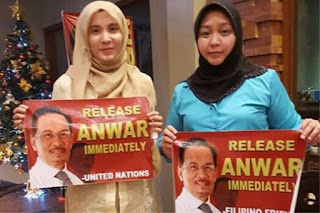 It's like a French politician posing with the daughter of Abu Bakar Al Baghdadi of Islamic State to further her political interests.

I was made to understand that PKR's Tian Chua, one of the loudest to criticise the authorities' handling of the Lahat Datu  incident was also there when the picture was taken.

What a bunch of hypocrites.

If there is one thing I hate most about members of Malaysia's opposition is their hypocrisy in exploiting an issue without any regard for ethics to further their political ambitions.
Posted by Annie at 16:43