Najib's people better behave after this

I decided to spend tonight in Janda Baik.

It was raining just as I reached here.

So much for the good weather in the morning.

Spend three hours at the place on top of the hill having tea and cigarettes while waiting for the rain to ease off.

Didn't read my book though as I had intended. Just contented with enjoying the hilltop scenery despite the rain.

It was still drizzling when I rode down the hill to this chalet.

Got myself a room as I didn't feel like riding home in the wet condition.

I hate riding in the rain.

Anyway, this place is nice.

There's a small stream running in front of the chalet and the sound of flowing water is very soothing.

I was relaxing and having some more tea and cigarettes when I got a call from a friend just now.

He is one of the Umno rebels.

My friend sounded a bit upset.

I wish he didn't call as what he told me broke my relaxed mood for the day.

He said he got credible information confirming rumors that Umno deputy president TS Muhyiddin Yassin and vice-president DS Shafie Apdal will be stripped off their party posts at the coming supreme council meeting on Tuesday. 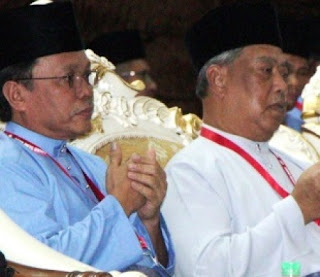 "It's true. They are not going to do it at the Umno HQ but at the parliament building after the Dewan Rakyat sitting that day.

"They don't want Umno people to gather and protest like during the last supreme council meeting at PWTC. They can't gather to protest at the Parliament building," he said.

I don't know how true was my friend's information but I did asked him whether Muhyiddin and Shafie will indeed be absent from the meeting as rumored.

"It's as reported. Muhyiddin will be in Japan and Shafie is performing umrah in Mecca that day," he said.

"So, what you all rebels going to do about it?" I asked again.

The way I see it, if what my friend said is true, then it should not come as a surprise.

The Umno leadership needed to remove Muhyiddin and Shafie if it choose to be led by Najib till end of this term.

Otherwise the duo will be thorns in Najib's side.

And they need to be removed before the next party general assembly early next month.

As I had previously wrote, it would be awkward to let the duo deliver their speeches at the event.

Muhyiddin should be the one to open the party wings' meetings and deliver his closing speech as deputy president on the last day of the assembly.

Shafie as a vice-president will have to deliver his speech too on the last day of the event.

The party leadership should be concerned because the duo will likely not hold back their opposition against Najib in their speeches as they wouldn't have much to lose now that they had been dropped from their posts in the government.

Muhyiddin is formerly the deputy prime minister and education minister while Shafie was the rural development minister.

Najib dropped them from the Cabinet during a reshuffle a few months ago after they made several statements questioning the handling of the 1MDB controversy.

I think Muhyiddin and Shafie already knew what's coming thus their absence from the country next week.

Maybe they wanted to spare themselves the embarrassment.

I wish it has not come to this, but what happened has already happened and there's nothing that can be done to prevent it.

If it is true that Muhyiddin and Shafie will be cast out, then I hope members of the Najib's camp have already formulated a strategy on how to handle the fall out.

It will not be easy to win back the support of disillusioned members and supporters.

All those media people, cyber warriors and bloggers who are supportive of Najib must be more convincing now when they argue that what their bosses are doing were right.

Just whacking left, right and center like what they are doing now is not going to help Najib.

People don't like it when Najib's people behave so gung ho and act as if they are so powerful that they can bully others all over the place.

This is an example of Najib's people doing what they should not be doing,

Najib's people may argue otherwise but the facts remain that BN will need every single vote that it can get in the next general election just over two years from now.

Bear in mind that in the last general election, BN barely made it through despite everyone being fully supportive of Najib.

Stupidity of Najib's people in believing that the world is their oyster after the rebels had been shut up will lead to disaster come the general election.

It's not them who won the fight against the rebels.

It was the sheer power wielded by Najib as PM and Umno president which cut off all the avenues to remove him from his post which broke the rebellion.

All that came with a price, of course.

Najib's people are fools if they think they had overcame the trust deficit arising from the rebellion the past months.

This is the time for them to heal the wounds if they know what's best for their boss and themselves.

The time to whack people is over.

I hope Muhyiddin and Shafie will be the last ones.

If Najib's people continue to be stupid, then we may just wait for the next general election to see the consequences.
Posted by Annie at 19:20