I got a call from a friend who is a Johor Umno member after this story came out this afternoon,

Media to be blacked out of Umno general assembly

How the hell would I know.

I'm not even an Umno member, okay.

I think Umno secretary-general Tengku Adnan Tengku Mansor who made the announcement is the only one who can answer that. 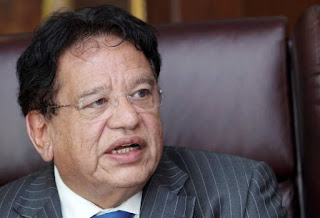 True enough, not long after that today, this story came out,

Obviously DS Ahmad Zahid Hamidi, the currently second most powerful Umno leader was not sure what Ku Nan was talking about.

Must be some sorts of communication breakdown.

I suspect the decision to ban media coverage for the Umno general assembly was made by people at the Umno headquarters.

As I previously wrote, I don't really like those people. They are not near clever enough in many of their decisions.

Actually, earlier today, I was told that the big shot mainstream media bosses had been briefed on the ban this morning before the announcement by Ku Nan was made.

I wonder whether they protested against the decision or that they cowered in fear when told of the ban.

Well, I think they should protest.

It's not good for Umno's image, after all.

Evan DAP allowed the media (including the pro-establishment mainstream media) to cover their party assemblies.

Now people may likely say that Umno does not believe in Press freedom.

Even Umno members like my friend are starting to believe that.

I'm of the opinion that there are ways to counter the alleged spin by all those pro-opposition news portals instead of imposing a media ban.

The pro-establishment mainstream media can do that job.

After all, there are many smart and crafty ways it can be done.

For example, New Straits Times (NST) which has millions of readers, I was told,  can counter The Malaysian Insider's (TMI) alleged spins by churning out credible articles of highest quality which make the public realise that TMI is actually just trying to bullshit them.

I heard the NST people are very good in politics. Surely, their talents in politics can be fully utilised to neutralise TMI.

Whatever it is, I hope Umno president DS Najib Razak, or at least Zahid can stop these sorts of nonsense which were not helping in projecting a good image of Umno.
Posted by Annie at 22:19