The Karak Highway is still mostly closed and works still ongoing to clear the landslide.

I was made to understand that the people of highway concessionaire Anih Bhd are doing their best to hasten work at the site.

The authorities are also doing their part.

My salute also to the journalists who are at the moment struggling to get to the location of the landslide.

I know that it's difficult and risky to get to a location of a disaster like that.

Contrary to what were said about them by some quarters, most of our journalists are quite dedicated to their work and brave.

Hope that they take care of themselves and always be safe.

There are many other things I think we should be worried about now rather than just politics.

The rainy season is back.

Last year around this time there was that massive flood which caused so much damage.

I was in the thick of things at that time.

I remember PM DS Najib Razak and his then deputy TS Muhyiddin Yassin trying their best to visit the flood victims.

Everyone were united in the relief efforts.

Well, hopefully such a terrible flood is not happening again this time.

Even if it happens again, my prayer is that the authorities are more prepared this time.

Some areas in the north have already been hit by flood but on a rather small scale. 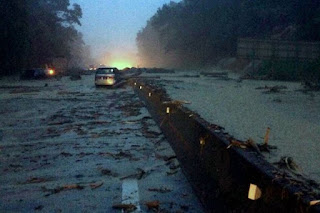 It cuts off the main land route to the East Coast at least until 10am tomorrow.

For now there were rumours about vehicles being caught in the landslide.

Hopefully it's not true.

I never like that stretch of the highway, especially at night.

It's very dark, very steep and there are many tricky corners.

Very hazardous especially when there are many slow moving and ill-lit trailers on that stretch.

I hope the highway authorities can improve safety there.

As for the coming weeks, Malaysians, especially those living in low laying riverine areas should be prepared for any eventuality.

Those traveling in the rain should also be extra cautious.