Malaysia will be a better society without mandatory death penalty

I'm against capital punishment as currently practiced in this country.

Under our laws, when the State kills someone, it kills that person on my behalf and that of everyone else in this country.

Our criminal laws dictate that when someone commits a crime, it will be a case between that person against the State which represents us all.

It's unlike other laws such as contract (Torts) or family laws where the cases involve disputes between individuals.

Therefore, in matter of enforcing capital punishment, the State represents us in pursuing someone's death over a committed crime.

Personally, I don't want anyone to do that for me. 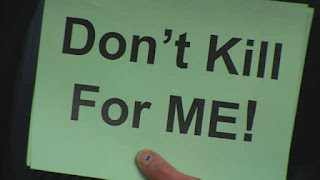 I don't feel right for the State to kill a criminal for me no matter how heinous the crime he/she committed.

When I was a law student, I got involved in a lot of arguments over this matter.

My Muslim friends said that I was against the teaching of my religion for opposing the death penalty because according to them Islam sanctions such a punishment.

Normally, I pointed to them that under the Islamic laws, the family of the victim is allowed to forgive the person who was found guilty of causing the death of their loved one.

That should mean the death penalty in Islam was meant for the State to punish the offender for those who directly suffer from the death of the victim and not for the rest of society.

I do recognise the right of those who lost their loved ones to demand just retribution, but not others' who got nothing to do with the case.

Honestly, I don't feel that I have the right to demand for the death of anybody the way the laws are being exercise in this country.

So, I do welcome this news,


I think we are moving in the right direction as a more matured society.

Life is indeed precious and we need to be more careful before passing judgement on whether to end a person's life for a committed crime.

I was very uncomfortable from the start about the mandatory aspect of a death penalty as currently practiced in this country.

It's so final and the courts doesn't have much choice when dealing with an offender who committed such crimes which warrants it to pass such a judgment.

Mandatory death penalty is for the crime of murder,  drug trafficking,  treason and waging war against Yang DiPertuan Agong.

The courts have very limited discretionary power in such instances.

This to me doesn't serves justice well.

I know of cases where the judge was aware that the person being charged with a crime punishable by a mandatory death penalty was not guilty but have no choice but to pass such a sentence.

One such instance was when a husband adamantly claimed that the drugs found by police  in his home belongs to him and not that of his wife while all evidence indicated that the wife was actually the one who was involved in drug trafficking to make ends meet.

The husband, an odd job worker was actually protecting his wife because he loves her and did not want their young children to grow up without their mother.

He also felt guilty that he did not provide enough for the family that his wife had resorted to sell drugs.

So, he decided to take her place at the gallows.

Sadly, the judge knew this was the case but was powerless to pass a lighter sentence on the man.

He had to pass the death sentence because it's mandatory to do so.

Legally speaking, the judge sent the man to death despite knowing of his innocence on behalf of all of us.

The burden of guilt in this instance belong to all of us.

Bear in mind that in cases of death penalty involving drug trafficking, the burden of proof is much lighter for the prosecution because the law which govern them was based on presumption.

The presumption is that a person would be considered to be trafficking drugs if they were in possession of a certain amount of dangerous drugs.

Under section 39B of the Dangerous Drugs Act, those in possession of 15 gm or more heroin and morphine; 1,000 gm or more opium (raw or prepared); 200 gm or more cannabis; and 40 gm or more cocaine will receive the mandatory death sentence.

The burden of proof is actually on the defense to proof innocence.

It's unlike any other crime where the prosecution bears the burden of proof where it has to prove beyond reasonable doubt the offender's guilt to secure a conviction.

So, the possibility of someone being sent to the gallows for drug trafficking is rather high and the courts have no other recourse but to pass the death sentence once guilt has been established.

As far as I'm concerned, that's a rather risky way to decide whether a person should live or die.

If I'm a judge, I don't think I will be able to sleep peacefully at night having to send someone to his/her death under such laws.

Again, bear in mind, technically it's us as a society who are sending people to their death that way.

The judges, as interpreters of laws are merely our representatives.

It's our wakil rakyat in parliament who make those laws and we are the ones who put them there to make such laws on our behalf.

I'm glad that they now may change the laws, at least to make us less callous in  passing judgement on whether someone is to live or die.

I hope the amendments will be done as soon as possible.

Justice must be tampered with mercy.

Mandatory death penalty is devoid of that.
Posted by Annie at 18:17