The need to win back hearts and minds

Had a pleasant surprise.

The family of a friend visited me where I am now yesterday.

My friend passed away last year but I'm still close with his family.

I first met my friend a long time ago when I was still an opposition sympathiser.

Despite not being an Umno member, he was a staunch supporter of Barisan Nasional and so did his wife and children.

My friend, who was from Perlis and much older than me, used to give me lectures about my foolish political views at that time. 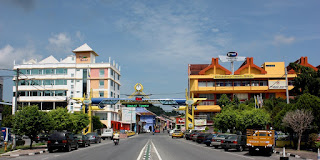 I listened to him without arguing because he was so adamant that he was right.

I don't like to debate because I don't believe that it solves anything.

Once someone has made up his mind, I believe words alone will not change his belief.

Nonetheless, despite our differing opinion at that time, we were still good friends.

My friend and his family members actually disliked the then Perlis Menteri Besar DS Shahidan Kassim but ignored their personal sentiments as they believe in the ideals of Umno and Barisan Nasional.

I continued to visit him and his family from time to time until he died of a heart attack last year.

So, it was a great pleasure for me to meet his family yesterday.

My friend's widow, Kak Yah was visiting her youngest daughter who is living near where I'm spending my weekend.

Her son-in-law and grand-daughter were also there.

We chit chatted about the good old days and also about my late friend and his infamous pro-BN lectures.

Then to my surprise,  Kak Yah suddenly asked me,

"Is it true what they said about the RM2.6 billion?"

She was referring to the sum in the personal account of PM DS Najib Razak which were used by the Umno rebels as among the controversies in their attempt to topple him.

Later, her daughter told me that they were quite unhappy with what is happening in the country.

"I wish ayah (her late father) is still around as he would know what is going on," she said.

Her husband,  a nice young man from Terengganu who is also a BN supporter chipped in at that point,

"If things continue like this, we are not going to vote in the next election.

"We supported BN not for people to do bad things to this country.

"They better convince us that the allegations are not true."

I hope, for the sake of the country, the Umno and BN leaders will do the necessary to win back support from people like my late friend's family.

Come clean and stop continuing to believe that people, including Umno and BN hard core supporters will swallow the less than convincing explanations they were being told so far about the controversies.

They also need to stop being arrogant and assume that the rural folks will automatically support them just because they are Malays.

The barely over two years left before the next general election is not a long time.

They better realise that.
Posted by Annie at 02:05