It's now in my blogroll.

I feel that it's important to keep a close watch on this Utusan Malaysia editor because of the stance he has taken on the current political mess. 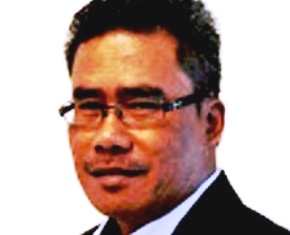 Ku Seman and several other Utusan editors had over the past week written articles questioning the handling of issues such as the RM2.6 billion loan and disbandment of the Special Task Force investigating the 1MDB controversy.

TS Zainuddin Maidin, a former Utusan boss and currently one of the rebels against PM DS Najib Razak described the stance of Ku Seman and his colleagues in Utusan as

However, I don't totally agree with Zainuddin.

I prefer to see what Ku Seman and his friends did as a brave effort by true journalists to get to the truth for the sake of the public.

They are really putting their career on the line by writing those articles.

In fact they are braver than Zainuddin and other former editors of pro-establishment newspapers who are now rebelling against Najib after they no longer have to bear the risk of losing their job.

Unlike those former editors, Ku Seman and his friends are questioning the government's conducts not because of their hatred for Najib or Rosmah but because they feel the need to correct the wrongs purely to protect the interest of the people.

I also believe that they are doing it because they want to save the current establishment which they feel is the best option that Malaysia have.

These are quotes by Ku Seman as reported by pro-opposition portal Malaysiakini:


“I am given freedom by the management and I believe the freedom was given by Umno to criticise because Utusan is different from Harakah.

“Harakah is an official mouthpiece (of PAS) whereas Utusan is a newspaper and it has to act like a newspaper rather than a mouthpiece,”

“As a media organisation, I think we can use our power to reprimand and question. I think the article is not defamatory, just a general article published in (Utusan’s weekend edition) Mingguan Malaysia. I don’t think it is too personal or accusatory,”

“I feel responsible to raise issues for the people. I feel that Umno has to be mature enough to be scolded and receive criticism from within and outside,”

Ku Seman and his friends in Utusan are good guys, okay.

I have met Ku Seman once.

It was about 10 years ago in London.

He appeared to me as a simple but thoughtful Malay guy.

He was also very humble.

Ku Seman just introduced himself to me as an Utusan reporter.

I don't really read Bahasa Malaysia newspapers and therefore I was not aware that he was at that time already a senior editor in the pro-Umno newspaper.

We got along very well.

We talked about work as well as personal stuff such as his kampung in Perlis  and his wife who was at that time quite sickly.

I can't remember that we talked about politics though.

He didn't strike me as one of those who rant and rave about politics all the time.

My assessment of him - Nice and intelligent guy. Quite principled.

Only later on that I found out that he is an accomplished writer with very sharp analytical mind.

Somehow, I never get around meeting him again.