About Tok Nan and the rebellion

Not unlike me, Syed Akbar also sees those who oppose PM DS Najib Razak, including himself as "rebels".

Well, what I found to be most interesting about his posting was this part,


Surprisingly it is not Johor that is leading the charge. My sources say that Pahang UMNO has turned against the president.  Surprise ! Surprise !

First off UMNO Bentong which is the home of Adnan Yaakob the Menteri Besar invited Muhyiddin Yasin instead to officiate their Bahagian meeting.   Adnan Yaakob of course has never been a big fan of Najib.

Three other bahagian in Pahang (which I will not name) are also going for broke. They are turning against the president. Two weeks ago Pahang folks told me about this 'wind of change' in Pahang. There is a source for this wind - which again I will not divulge.

It's interesting for me because a few days ago, a friend who is one of the rebels told me that the fight is not yet over because Johor MB DS Mohamed Khaled Nordin had indicated that he may lead the forces arrayed against Najib.

To that I wrote,


I basically disagree with my rebel friend. Khaled is after all just a light weight.

Now, this time I have to agree with Syed Akbar when he said Adnan (I normally call him Tok Nan) is not a big fan of Najib and the likelihood of the Pahang MB leading the charge against the Umno president is better than that of his Johor counterpart.

Adnan is known for his forthright attitude and most of the time will call a spade by its name instead of anything else, even if he may suffer from it later on. 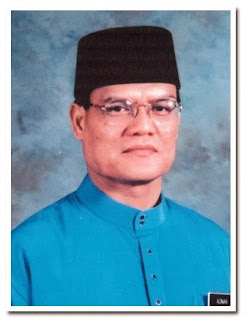 He was the one most vocal about the practice of money politics during the Umno election in 2004. His complaints were said to be among the main reasons causing the disqualification of TS Isa Samad who initially won the number one vice-president post.

Also, back in 1993, when DS Anwar Ibrahim challenged the late Tun Ghafar Baba for the Umno deputy president post, Adnan's Bentong division was one of just two which nominated Ghafar.

He opposed Anwar back then when everyone else was clamouring to get on the bandwagon of the now number one opposition man.

Najib, as well as other top Umno leaders at that time were part of the so-called Team Wawasan led by Anwar.

Almost everyone agreed back then that those who wanted to survive in Umno must be part of Anwar's team.

Adnan was the exception few.

Somehow, Adnan and Najib were never the best of friends.

It's not that they were real enemies, but the chemistry between the two was simply not there. A former Pahang NST bureau chief told me that.

Some blamed the situation to the traditional rivalry between those who support Adnan and a faction of Pahang Umno close to Najib and the then his right hand man, the late TS Jamaluddin Jarjis.

Now, it's a very badly kept secret that Najib does wish for Adnan to be replaced by one of his own trusted people.

Adnan is after all in his late 60s.

It's a well known fact that Adnan is under an orchestrated series of attacks to force him to step down.

The mainstream media is spearheading the attacks, first over the Cameron Highland issue and now the bauxite mining controversy.

They tried to paint a not so flattering image of Adnan as an incapable MB.

But as most political observers may already knew, Adnan is very much under the protection of the Pahang Sultan.

In fact, Adnan was supposed to leave his office last year together with former Terengganu MB DS Ahmad Said.

But of course the Sultan didn't want that to happen, thus he was spared.

Adnan is actually a simple man.

He is rough round the edges but has a very kind heart.

For me, Tok Nan is a decent "kampung guy".

Now, how likely will Adnan lead the rebellion?

Well, firstly, let me insist here that the rebellion is dead for now.

It has no means to end Najib's rule, at least until the next general election.

All immediate threats against Najib's rule had been neutralised last week.

The rebels can only make a lot of noises now.

Even if Adnan decides to lead the rebellion, he can't do much except making more of such noises.

Najib has in his pocket the Umno supreme council and everyone else needed for him to stay in power.

Even Adnan's main protector, the Sultan of Pahang had called for everyone to support Najib too.

There is no way Adnan will go against the wishes of the Sultan.

So, I think the likelihood of Adnan leading a rebellion against Najib is highly unlikely.

Unless, of course Adnan goes crazy and decides that he got nothing much to lose and therefore should have one last jab at Najib.

Adnan is after all almost certainly on his last lap as Pahang MB.

Everyone knows that Najib is going to drop him from his post sooner or later.

After that, Adnan is expected to fade into obscurity.

Then again, as I said, Adnan may simply goes crazy and refuses to do that.

He may thinks that if he leads the rebellion now, he will forever be remembered as trying to do something good before ending his career.

Really, he will indeed be remembered if he does that.

But of course, Adnan will be crushed as the rebellion could not possibly succeed.

Again, as I said, all the necessary tools for it is now in Najib's hand.