First, is it possible that someone is willing to donate RM2.6 billion?

The answer is YES.

Actually, even more than that.

This is a story of it,

The prince is worth $32 billion, and Forbes Magazine named him as the 34th wealthiest human on the planet, and on July 1, he announced that he's going to give away the entirety of his fortune to charity. 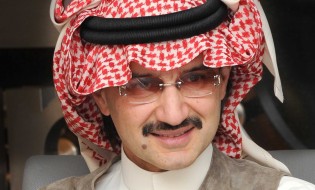 So, who knows, maybe there is indeed a generous Arab prince who decided to give PM DS Najib Razak RM2.6 billion as a "donation".

This is probably the scenario:

"Najib, since you are such a nice and handsome man, here, I donate to you RM2,6 billion. Use the money wisely to do good," the Arab prince said when Najib visited him in Abu Dhabi sometime before the last general election in 2013.

"Uh uh....thank you your majesty, I'm so very humbly appreciate it. You are so kind and generous," said Najib.

Najib then asked the prince,"Your majesty, may I use some of the money for Umno? My party and our BN friends need some extra cash to fight the evil Pakatan Rakyat, led by that guy from Sodom. I was told that they were getting lots of money from the Jews to fight us."

"Sure can. That's for a good cause what," the prince replied.

"But Najib, don't la spend everything for your party, use a portion of the money to help the oppressed and needy Muslims in the region around your country," he added.

"Oh, I will definitely do so your majesty. I will use the extra money to help people like the Rohingya, Muslims in southern Thailand and the Philippines as well as those very poor Muslims in Cambodia, among others.

"Thanks for giving me the money. I can't use my government's money for all that because Kit Siang and his irritating son will make all sorts of noise," said Najib.

"Good, good, good...and don't forget to give a bit of the money to your wife so that she can have extra to do her good work helping poor children with disabilities and such. I heard she's quite good at that," said the prince with a smile.

"I will definitely do so. Thanks your majesty," replied Najib.

"Okay, I'll tell my people to wire the money tomorrow. Give me your account number," said the prince.

Najib then gave his account number to the prince.

"Ah! This is good. You choose an Islamic bank to put the money," said the prince, clearly pleased.

"Oh, one more thing Najib..." the prince seems to remember something.

"If there are some leftover from the Rm2.6 billion, I think you should buy something nice for your wife....errr, a handbag, maybe?" said the prince.

"That's very generous of you your majesty. I'll ask Rosmah if she's agreeable to your suggestion. Thank you very much," said Najib.

So, maybe that's what happened.

Well, it's just me speculating. Jangan marah ya.

Wallahuallam
Posted by Annie at 17:11