The stupidity of some "defenders" of PM DS Najib Razak is beyond my comprehension.

Despite the rebellion apparently winding down, these monkeys decided that they can gain some extra brownie points by once again ramping up attacks against Tun Dr Mahathir Mohamad.


In making this call, non-governmental organisation (NGO) Pertubuhan Minda & Sosial Prihatin president Ramesh Rao Krishnan Naidu claimed this was because the former premier had been using the foundation as a platform to influence students to go against the current administration.
“If we look over the last few days and weeks, we can see that the former prime minister, who served for 22 years, has gone off track.
“And the way he conveyed his message to students is worrying with the statement that they should only hold street protests as a last resort to topple (Prime Minister) Datuk Seri Najib Razak, which is dangerous,” Ramesh said during a press conference at his office in Petaling Jaya, here, this afternoon.
Much to Rakyat Post's credit, the portal added these to the story;

Who the hell is this Ramesh Rao Krishnan Naidu, anyway? 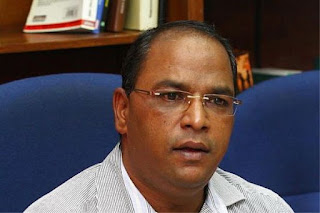 Even more importantly, who are his stupid handlers in Najib's camp?

What are they trying to achieve by continuing the attacks against Dr Mahathir.

For me, this will only further inflame the hatred towards Najib.

These people really think they and Najib can win the next general election on their own, is it?

This is one of the reasons why people like myself are very tempted to join the rebels.

Sometimes, we simply can't stand the stupidity of people in the Najib's camp.

Well, they must remember that they won the fight for now not because they were being smart but because they used the power at their disposal to suppress the rebellion.

The costs of winning that way was very high as it needed to be paid in term of extremely negative public perception.

Fine, they won, but to continue with the stupidity of their conducts such as this one will seal the fate of BN in the next general election.

As I previously wrote, it is


Does the Najib's camp think that people such as this Ramesh Rao Krishnan Naidu will help them win the next general election?

If that's their thinking, then Umno and BN are indeed doomed.