I am a bit sad at the moment.

I don't know why she was so angry with me for basically just saying that people should not vilify DS Rosmah Mansor to the point of dehumanizing her.

I mean, is she that evil?

Had she ever called people names?

Is it really true that she stole billions of ringgit of rakyat's money? Got proof meh?

Do you all actually believe that she personally supervised the blowing up of Altantuya's body as alleged by some people? Honestly, I can't. I can't imagine Rosmah with her big hair and carrying Birkin handbag doing that.

Anyway, I strongly suspect that her Birkins are fake, but she can't say it because that will be too embarrassing. 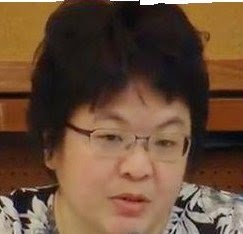 She is my dear blogging sister. Always will be.

Nothing wrong with having differing opinion of things.

Maybe she will cool off later.

Whatever it is, I am also too tired of people being angry with me these past few days.

My big boss was so angry with me the other day that I thought he would had literally kicked my ass.

It was over My bad habit

I am still waiting for him to give me the sacking order or put me in a freezer.

Then there were the smaller bosses giving me the evil eyes in the office.

I don't blame them though because I used the word "fucking bastards" to describe them.

Actually, I was just using that word as an expression because I need to appear garang at that time.

Actually, I know that they were conceived after their parents got married, and therefore they are not bastards...if you know what I mean.

Meanwhile, as for the smallest bosses, I think they were trying to avoid me like I am a leper or something.

Can't blame them too as who wants to be seen with the office bitch targeted for sacking anyway.

As a peace offering to Helen, here is a song for her,