Today I'm going to just stay at home and have a thorough rest.

Yesterday, despite my intention of taking a rest, I ended up doing quite a bit of work. Came back late last night too tired and fell asleep in the living room.

Now, just woke up. It's quite late.

Checked and saw some messages on my phone, one of which was from NST alert about a sister of enslave Maoist activist Siti Aisyah Abdul Wahab coming back from visiting her in UK police custody.

I do wonder what turned Siti Aisyah into a nut case like that. Something like those loony anarchists Hishammudin Rais and PKR's Tian Chua.

She was after all a brilliant student who won a scholarship to go to UK. Instead of coming home with knowledge to serve the nation, she got stuck there being a slave to someone called Comrade Bala.

There were actually many more cases like Aisyah. Her case reminds me of all those university students who choose to abandon their studies and family to be second, third or fourth wife of Al Arqam people. The deviationist group which gain prominence in the 70s and 80s was shut down by the BN government after it became clear that their teachings consist a threat to the country.

Earlier than that, there was the Communist Party of Malaya (CPM)which recruit mostly impressionable young Chinese into their rank. They brainwashed these recruits and forced them not to think for themselves, the same as how Siti Aisyah was made into a slave. In fact the CPM's ideology was Maoist too. It's an ideology which regulate the life of its followers in total.

The leaders such as the late Chin Peng has even the right to decide who should marry whom among his people. This is the type of people the Pakatan people wanted to bring back into the country and elevate as national heroes.

Leaders may be good and admired but they shouldn't be worshipped as if they were gods.

For instance, a leader shouldn't be regarded as a tokong.

Lim Guan Eng is just a man whose father is a leader of a political party.

That's how he became the secretary general of DAP.

He is not even very smart, charismatic, visionary or even handsome.

As the chief minister of Penang, what were the brilliant things he had achieved for the State so far?

How about this story,

Penang budget - four years of deficit, nary a surplus


Not so brilliant, isn't he?

And if we hang around people like Guan Eng for a little more while, we will realize that he also eat, sleep and shit like we do. Guys like Guan Eng also have desire and urges like us all, okay. Seriously, you think Guan Eng is godly that he is not susceptible to like pretty girls....or pretty boys like some other people?

The same applies to the likes of Anwar Ibrahim, Azmin, Nik Aziz, Hadi and of course Mat Sabu.

Anyone worshipped Mat Sabu out there? Anyone? 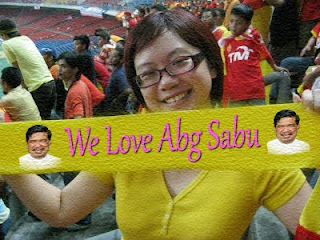 Well, that would be a real nut case, if any....of course, he is the deputy president of a party whose members were promised with paradise....most divine, isn't it?
Posted by Annie at 11:21