It's almost end of the year.

I'm going to take it easy over the next few days and post only light stuff.

Let's start from the bad stuff of the year first;

10. The status quo of the Umno election in October proved that there are plenty of stupid Umno people.

8. The Chinese tsunami of GE13 in May signaled the worsening racial polarization of the Malaysian society.

7. The loss of moderate Malay Umno leaders who contested in mix constituencies due to the Chinese tsunami resulted in the party being dominated by opportunist hardliners who are ever willing to flash the race card to be popular.

6. DAP, backed by overwhelming Chinese support in GE13 is now the biggest Pakatan coalition member, reducing the majority Malay/Bumiputera-based PKR and Pas as its minions.

5. The blatant lies of Pakatan in the aftermath of GE13 such as the 40,000 Bangladeshi phantom voters and blackout at poll counting centers were swallowed whole by their supporters, indicating how stupid a lot of Malaysians could be.

4. As the year progressed, I found it harder to find positive stuff to write about Malaysian politics.

3. My home state Johor is being ripped apart by a monster and its gang after GE13. All signs indicated that it will fall to Pakatan in GE14.

1. As the year is ending,  I found out that I'm in love with a Chinese DAP supporter, who got double chin. Urgh....

Okay, on to the good stuff of the year.

Actually I find it hard to think of anything really positive on the political or personal fronts this year. This is not a good year as far as I'm concerned.

9. MCA people showed willingness to change during their party elections last week, which could be the turning point for BN.

8. Pas elected a lot of idiots as their leaders during the muktamar last month which I believe may turn off more sane Malays from supporting Pakatan.

7. Lim Guan Eng getting more arrogant this year. As a chief minister he even deemed it fit to call people names at every turns which displeased him. 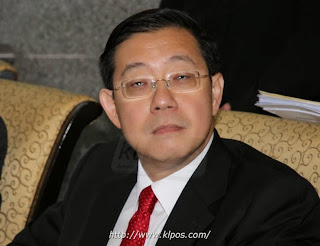 I believe that decent people, including among the Chinese are not fond of a spoilt brat who throw tantrums all the time like that.

6. Tun Dr Mahathir Mohamad seem to be going great this year despite his advanced age. The presence of the former PM was perhaps the brightest positive spark on the otherwise gloomy political front this year.

5. Doctors confirmed early this month that I'm not suffering from cancer. But they warned me to quit a lot of stuff and live a more healthy lifestyle. That I think I can do.

4. I found out a few months ago that my mother and father still love each other. I always thought my mother didn't love my father anymore because of the rather hostile way she had always treated him. But I was wrong. My father said it was just her being the Chinese lady that she is.

3. This year was tough at my work place, but I persevered. I think I'm quite good with what I'm doing.

2. What I did at work this year may afford me to switch to a better job. Looking for one.

1. As the year is ending,  I found out that I'm in love with a Chinese DAP supporter, who got double chin. Urgh....what to do, it's fated, I guess.

Well, thats all for now.

Merry Christmas and cheers.
Posted by Annie at 10:15