A plea to Datuk Najib

I was lying on bed in this house in Kuantan, feeling rather sickly, when the phone rang just now.

It's a call from a friend in Johor.

After the usual greetings and enquiries of each others' health, the guy asked me what do I think of the Umno general assembly last week.

Boring, was my answer.

Really, there was nothing memorable at all about the whole event. Except for the massive flood which happened at the same time as it.

Then my friend, who is an Umno member said he was so upset with PM DS Najib Razak for praising his wife DS Rosmah Mansor in his closing speech at the assembly.

Well, I told my friend that in my opinion, Najib is acting as a good husband. People are whacking his wife, so, it is only natural that he has to stand up and defend her. 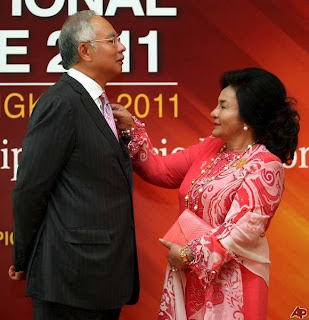 What do you expect the man to do anyway?

Whatever it is, Najib defending his wife was not the worst at the general assembly.

For me, what was the most nauseating was Shahrizat's speech that day. Her apple polishing, self-glorification etc was beyond my level of tolerance. Doesn't she realized how ugly Umno is in the eyes of so many because of her?

My friend agreed with me on that one.

He sounded sad though.

He is after all a hardcore Umno member and had been attending the Umno general assembly for many years. This year he can't attend it because he is no longer in the Johor Umno list of delegates.

My friend said he was frustrated with how Najib now handles the party and the government.

He pointed out the excesses which were happening in Johor which I had highlighted in my past postings as well as several appointments by Najib which we feel was not made wisely.

We also talked about Najib's highly paid bungling advisors. You can read the latest on that here : PM's Advisors Insult Mandela, Keep Bungling Along

"Can't Najib do anything about it?" my friend asked.

"If things continue like this, I may not even vote for BN in the next general election. I will never vote for the opposition, but I don't have the heart to support the current leadership anymore," he added.

It's not the first time I heard this from a BN supporter.

The difference was that, this friend of mine is a true member of Umno.

The others I know who said they had given up on BN leadership were just pro-establishment neutrals like myself.

I'm doing this posting in the hope that someone may forward it to Najib and make him realize that if things doesn't change, he will lose even more support on the ground.

Sorry, but I need to say this,

Datuk Najib, you need to realize that more are getting disillusioned with the establishment. Please do something about it.