Arrived in Kuantan about 3pm yesterday.

Some stretches of the East Coast Highway between Maran and Kuantan were a bit damaged with some potholes caused by water.

I exited the highway at the Kuantan toll and realized that the flood had to a large extent subsided but the damage caused by it could be seen such as broken surface and pot holes on the road, fallen trees and garbage everywhere.

Reached the house of the lady I'm staying with at Astana Permai to find her busy packing whatever extra clothing items, blankets and mattresses she could spare for the flood victims.

We then went for a drive to some of the affected areas in Bukit Rangin and Tanah Puteh.

Some of the residents were just back from flood relief centers and busy cleaning up their homes. 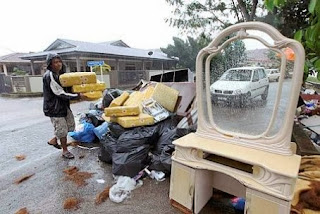 A lot of them had lost most of their belongings.

One of those I talked to in Bukit Rangin said the flood happened so fast because the rain was so heavy that the bund wall built along Sungai Isap to prevent a flood had broke.

The Drainage and Irrigation Department had built the bund wall as part of its flood mitigation project at a cost of RM7 million in 2005. It managed to prevent the area from being flooded during the massive flood the next year.

The rain fall on the first day of the flood was estimated to be 15 times heavier than normal for a single day. It could had caused the river to swell so fast that even the bund wall could not contain the water.

It looks like the government need to do more to anticipate such occurrences and improve their flood mitigation projects.

I think they can do it.

In the massive flood in 2006, the worst affected area was Pekan largely due to the siltation of Kuala Sungai Pahang. The government spend a lot to deepen the river estuary and till now flooding at Pekan and along Sungai Pahang had been rather mild, if ever.

It's the same thing that the government did for the rivers at Kota Baru and Kuala Terengganu. Flooding there had been manageable of late.

Other than deepening the river estuaries, I think the Pahang state government need to also check on the rapid development projects carried out on the fringes of Kuantan which caused a lot of areas being cleared off vegetation.

This may had caused the water to flow faster to the rivers as lesser trees and vegetations meant there would be nothing to hold it back.

I also think the Majlis Keselamatan Negara people had not done their job well. They should had thought out a proper plan in such circumstances.

They could had anticipate the impact of the heavier rainfall than usual which the Meteorological Department had forecasted and then deploy rescuers and relief workers, even from non-flood affected states. This will ensure faster assistance being rendered for the flood victims.

The government linked companies should had also played their role better. Petronas, for instance have at least 10 helicopters which they could contribute in rescue and relief efforts. At the height of the flood, rescuers had to depend solely on RMAF (Royal Malaysian Air Force) helicopters to winch out flood victims and send supplies to areas cut off by the flood.

I just helped the lady I'm staying with, with the distribution of mattress, blankets and pillows to a family whose house near Sungai Isap was totally inundated with flood water. They had lost all household belongings and needed all the help they can get to get back on their feet.

Now, I'm not feeling so well. I'm having sore throat and headache. It makes me feel quite useless. Just help a bit, already feeling tired and getting sick.

I think I better rest now. Anything, I will write some more, later.

P.S I wonder whether political parties on both side of the political divide are planing to do anything more to help. So far, I had only read about relief efforts by Umno and a bit by Pas.
Posted by Annie at 11:31