Do you really get impoverished by the price hikes?

At the office now.

Nothing much to do. Most of my colleagues are still on Christmas holiday. They will only be coming back after the New Year Day.

Anyway, blaming Umno for everything including causing everyone to be impoverished, especially the Malays was not actually a very nice thing too. As if Umno is all so evil. Sounds very DAPish la.

Whatever it is, I don't think that many Malays or those of other races have suddenly became poor because of what seem to be not so wise decisions by the government which caused the price hikes of several items and services.

Yesterday, on Christmas Day, I went shopping again, this time at the Curve.

Well, I was not really shopping but more like escorting some ladies and their kids to do their shopping.

The road was jammed with shoppers, so, I dropped them off in front of the Ikea and then went to a nearby car wash. The wash and polish costs RM250. Later when I picked up the car I found that they had not done a very good job. I'm not going to send my car there anymore.

Walked over to the Curve and found the place to be packed just like it was when I went to shop at Mid Valley the other day.

I saw the Aidijumah's tudung shop at the Curve being swarmed by the ladies yesterday. Here is the picture at the shop which I took myself. 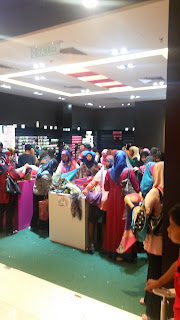 So, they are not exactly impoverished, I think.

Anyway, I really don't get it when it comes to Malay ladies and their tudung.

Well, I know that it is a rather simplistic way to gauge the prosperity level of the community but then, I am a simple person and to me if there are many people shopping at a premium shopping mall like that, it's an indication that things are not really too bad.

If you want to really get facts and figures, then go to the relevant ministries' websites and check if the number of people living in poverty has increased following the recent price hikes that everyone are bitching about.

While you are at it, do also check if the number of households with Astro services had decreased of late, including at the squatter areas.

Yup, you should also check with the telcos if the number of Malaysians using smart phones had decreased because many could not afford to pay their bills anymore.

You know of anyone who had stopped using smartphone because he/she can't pay the data package?

I mean, yes, the price hikes were really bitches, but to say that it impoverished the people is a bit too extreme la.

And to blame it solely on Umno is also not exactly very wise, I think, as there are many factors to be considered, okay.

Well, if you must, I rather blame it all on Ahmad Maslan.

Why the hell Najib made him deputy finance minister is beyond me, actually.

Whatever it is, lets not get extreme and too negative. I think we should wait for more developments which may improve Malaysia next year.

Najib had in his speech at the MCA's AGM recently said the government is making adjustments so that the rakyat will not be too burdened by the rising costs of living. Hopefully there will indeed be good things coming after this.

If there are none, then by all means, go ahead and vote for Anwar Ibrahim to be made PM in the next general election. Hopefully he will not try to sell off the country to the IMF like what happened when he was finance minister in the late 90s.

And I think Mat Sabu will make a good replacement for Ahmad Maslan as deputy finance minister in Anwar's Cabinet.
Posted by Annie at 11:20