It makes me feel like one of those British soldiers in the trenches of First World War after being ordered to charge through the no-man's-land at a German machine-gun nest.

Almost certain to die one.

Of course the first thing that cross the mind of a soldier in a situation like that would be, why the hell is my general so stupid?

The enemies were not going to play fair.

It's not like in the 17th century war where both side would lined-up in their most colorful uniform and shoot at each other as if it's at a fun fair. All very gentlemanly like.

Najib should know by now that he need to change the way he is fighting the likes of Anwar, Guan Eng and Mat Sabu.

These are not the types who knows how to fight fair. For them, the end justifies the means. As correctly pointedly by Helen, their primary weapon is hate. And this hate is propagated by way of large scale campaign of spreading lies and slanders.

The likes of Anwar, Guan Eng and Mat Sabu knows that most Malaysians love their gossips. The more sleazy, the better. They actually want to believe those sleaze because it makes their life more colorful.

Let's take the Altantuya case as an example. The likes of Anwar, Guan Eng and Mat Sabu will still give their supporters the impression that the Mongolian was a mistress of Najib, with Razak Baginda as the pimp, and when Rosmah found out, she decided to personally murdered the girl using C4 explosives.

Really, that's the story believed among the hardcore Pakatan people as far as the Altantuya case is concerned.

Go ahead and ask any die hard DAP, Pas and PKR people and they will tell you that they believe in such a story. And they are willing to spread the story so that more people will hate Najib and his wife. Their ultimate aim is to remove him and BN from power. Whether they themselves believe in the story is irrelevant. Bottom line is about getting the power to rule the country. The end justifies the means for them.

They are relentless in their attacks as they need every ounce of hate to persuade the people to remove the present establishment so that they can have the power for themselves.

I went through such attacks by their cybertroopers rather regularly. Here are some examples from just my latest posting Racists who call others racists

Now, seriously, do you all think that these tunnel vision types who wrote such comments are really interested in Najib's  talk of reconciliation? Do you all seriously think these are the type of people you can reasoned with?

Najib has to see this and change the way he is conducting things if he wants to win the war against Pakatan. Otherwise, BN will not survive GE14.

Najib need to learn from the mistakes of GE13. You play soft, you die. It's as simple as that.

For goodness sake, these people are by not so many words telling the whole wide world that Najib is a sex maniac and that his wife had turned into a murderer because of it. 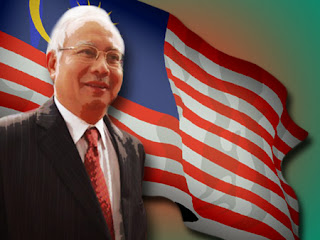 And Datuk Najib still want to continue being nice to them?

As if he had not been burnt enough for being nice to one particular community before GE13.

Honestly, on top of that, I was also so frustrated when he appointed some dubious characters to head the GLCs and then felt so helpless with some of his choice for Cabinet ministers. And when he decided to maintain the status quo within Umno by keeping nauseating characters such as Shahrizat, I almost gave up.

But really, what choice do someone like me have.

On the other side are the likes of Anwar, Guan Eng and Mat Sabu. Extremely corrupt, arrogant and disgusting respectively. They are even worse. Yes, that's the alternative.

It makes me want to throw up every time I think that I have no other choice but to continue the fight despite feeling let down by the conduct of the general.

Nonetheless, I pray that Datuk Najib will see the true nature of the enemies and do something different to fight them before it's too late.
Posted by Annie at 02:06