- MCA AGM is a watershed moment for the party

- Four steps to strengthen and revive the MCA, reunite, restrategiize, reinvigorate, and reestablish.

- The cooperation between Bumiputera, Chinese and other communities is the basis of BN's approach and should be continued.

- We in Umno also should not say things that upset the feelings of the Chinese community.

- MCA leaders must set aside all personal interests and look at the party and the nation.

I really hate it when I can't sleep like this. It is past 3am at the moment.

And I'm working today. Need to get out of the house at 7am.

Since I can't sleep, I may as well reflect on something.

PM DS Najib Razak will be addressing the MCA AGM about 10am today.

It will be interesting to hear what he has to say to the party which majority of its members betrayed Barisan Nasional by voting for DAP and its allies during GE13 in May. 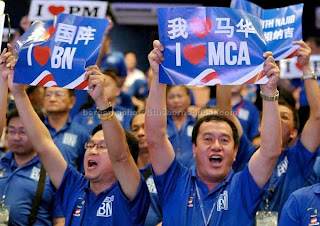 They almost succeeded in replacing the Umno-led BN government with a DAP-controlled Pakatan administration.

The seven remaining MCA parliamentary seats were courtesy of Umno and its Malay supporters except for Labis, a non-Malay majority area.

In Chinese majority areas, it was simply a walkover victory for most of the DAP candidates.

As far as I'm concerned, the MCA's betrayal was complete and irreversible on May 5. They were not even repentant.

Their newspapers, The Star are still at it. Undermining the BN government at every turns possible.

So, what could we expect Najib to say to them?

Honestly, if I'm Najib, I wouldn't even bothered to go to Wisma MCA and talk to them.

But then again, that's me and I'm not the chairman of BN like Najib.

I guess he has to go there and be nice. After all, that is the Malays' polite way of doing things.

Well, I don't really feel like bashing Najib despite all the nonsense which has been swirling the past weeks.

So many had done that, especially among pro-Umno social media practitioners.

Suffice to say that I hope he tells the MCA crowd, they should redeem themselves after what they did during GE13.

I want Najib to tell them not to be too greedy by wanting more for their community to a point that they were willing to betray their old friends.

Are there such concepts as loyalty, honor and trustworthiness in the Chinese culture?

My mother thought me all those concepts when I was young. And she is Chinese.

So, how come the MCA people don't seem to have a grasp of those concepts during GE13?

Well, never mind, those were all in the past. Probably they were caught up in all those DAP's hype of Chinese being second, third, fourth and fifth class citizens at that time.

Whatever it is, hopefully, Najib could persuade them not to be such backstabbers again in future.

Well, I'm not putting much hope to it, though.

I know, it's hard for Najib to tell MCA to get in shape while Umno itself is so full of monkey shit at the highest echelon of its leadership.

Still, I hope he could pull some sorts of fancy tricks on this one.
Posted by Annie at 04:31