Umno is bad and Pas is good, is it?

This is the headline in the Sun,

"After the poor results on May 5, the MCA was blamed, and the Chinese community was blamed ... everything was the fault of the Chinese," he said.
"An eye for an eye is not going to win the Chinese back; it may even drive non-Malay voters away and that may be the end of BN," he said in his speech at the MCA Youth annual general meeting."

So, how? Continue be nice again, is it? Give everything again, is it?
You think the government is victimizing the Chinese again?
FYI Ka Siong, the administration is currently not nice to everyone la, not just Chinese. Toll naik, harga barang semua naik, Melayu pun tak happy okay. Guess the administration has no option on that or it's simply the PM listening too much to his expensive consultants again. Hopefully it's the former.
As for blaming the Chinese for the poor outing at GE13, it's true what over 90 per cent of them supported DAP and its allies, believing that they can change the Malay-led government and turn this country into something like Singapore.

What do you expect the jerks in Umno to do? Of course they blame it on the Chinese. Anyone who takes a hardline stance, such as Zahid Hamidi will become popular.

You want them to stop? Common la, you know that they will not.

The Chinese community laid all their cards at GE13 and they still can't win. They caused most of the moderates in Umno who contested in mixed areas to be  defeated.

Now all sorts of opportunist jerks are holding the power in Umno. And this people have no qualm to flash the race card.

Just consider this, even that useless guy Fuad Zarkashi whom you all voted out in Batu Pahat had won a seat in Umno supreme council holding a ticket as a hardliner who whack the Chinese day in day out.

It's just the way things are la.

And Ka Siong, you better be careful, the Umno people in Ayer Hitam may sabotage you after this, okay.

For the Chinese community, I think you all just hang on for another four years. Just weather the storm as after that Pakatan will take over and DAP will save you all.

But still, do pray in your temple and churches that Umno is not totally wiped out as otherwise the whole Melayu race will gather under Pas' flag.

Just imagine what will happen if Pas has all the 60 over per cent of the Malay/Bumiputera votes.

What do you think will happened?

You seriously think they will not want to go on their own and try to set-up their own theocratic state in Malaysia?

I know, at the moment you are comfortable with them as you got the likes of Mat Sabu and the other Erdogans in there, but do you think they can last for very long once the party expended after Pakatan win the next general election?

Do you really believe that Pas will be contented to just be a junior partner in Pakatan and just look stupid as DAP dictate things to PKR for this country to be shaped in the likeness of Singapore?

Do you all Chinese people think Pas will just stand by to let DAP and their more liberal Malay allies dismantle all those Malay-centric and Islamic policies which all these while under BN you had considered as repressive and unfair?

Do you really think Guan Eng and gang can survive a clash with Pas which by then command the support of the entire Malay Muslim population after the demise of Umno.

Remember, their's a jihad while your's just about getting a better deal from an already a good deal. 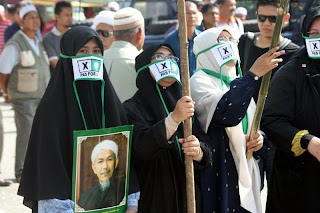 Who do you think will win in the end? Seriously.
Posted by Annie at 08:36