The Umno general assembly this year is totally overshadowed by the massive flood in Pahang, Terengganu, Johor and Kelantan.

It's heartening that Umno delegates, especially from Pahang, had rushed back home from PWTC to assist in flood relief efforts.

I read in the NST yesterday that one of those who was first to get back to badly affected Kuantan was former Umno Youth exco member Datuk Mohammed Suffian Awang. 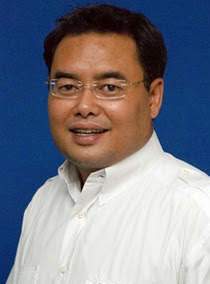 He was interviewed while busy on the ground helping the evacuees near his home  in Tanjong Lumpur and other part of Kuantan.

Suffian is the BN candidate for Kuantan who was defeated by PKR's Fuziah Salleh in GE13.

Fuziah had on the same day busy in Parliament making rhetorical statements about the flood in her constituency and having a verbal fight with Bung Mokhtar who had told her to just shut up and go back to help her constituents.

The irony of the whole thing is that, Fuziah is now a big shot in PKR, a member of parliament, and known by her admirers as an environmentalist and expert on Lynas  rare earth radioactivity.

Suffian on the other hand is now just an ordinary Umno member whose political career is probably at a dead end after the people of Kuantan choose Fuziah over him as their MP. He didn't even contest for any divisional post in the party election in October.

But still, Suffian is the one who was first on the ground helping the flood victims of Kuantan.

You can read the NST report here


Rushing back to help flood victims

I had wrote about Suffian before the GE13. You can read it here at A good young Umno leader

p.s For those who have never had a conversation with Fuziah, do try to do so for about 30 minutes. You may have the same conclusion as mine - SHALLOW
Posted by Annie at 12:38