My plan, once the Chinese take over the country

The MCA elections are to be held this weekend.

But who really cares lah....no matter how you want to slice or dice it, for the overwhelming majority of the Chinese community, the winner will still be the likes of Lim Guan Eng, whom they feel will one day give them the political supremacy in this country.

The Chinese votes will never go back to MCA.

Let's be honest, how many MCA members who voted for DAP and its allies in GE13? My personal estimates is at least 70 per cent.

MCA had served its purpose, which were getting the citizenship and basic needs for the Chinese during the formative years of this country and securing the community's economic dominance via its good relations with the majority Bumiputra community.

MCA had served its purpose well, and now it is time for the Chinese community to move on to attain a bigger thing : political power.

This is what the DAP has been relentlessly teaching the Chinese community since pre-2008 general election.

Supreme political power could only be achieved by them by giving full support to the DAP, which was exactly what the community did when over 90 per cent of them gave their support to the party during the GE13.

Of course the DAP could not be at the forefront of these big things to come yet, because the Chinese in this country still consist less than 30 per cent of the population. They will put Malay puppets like Anwar Ibrahim as their front.

But that's just for now.

Once they could blur the racial lines of others, the ambition of attaining the combined strength of political and economic clout could be achieved.

That's why the DAP people are shouting RACIST! RACIST! RACIST! at anyone who talk about Malay unity or even Malay identity. They need to dilute such things which are the main stumbling blocks to their ambitions.

Do they on their part dilute their own Chinese identity to attain that nonsense so-called Bangsa Malaysia? 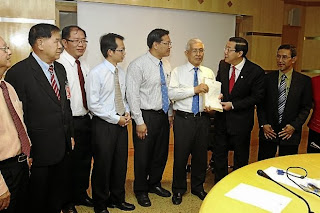 In this picture, Guan Eng (second from right) is expressing support to representatives of Dong Zong, the Chinese schools association who are demanding equal treatment from the government for their schools as compared to the national schools. Of course, they also wanted all teachers in their schools to be fluent Mandarin speakers (another way to tell Malay teachers to get out from their schools) and less hours for their students to study the national language as they feel it could dilute their children's ability to speak in their mother tounge.

Honestly, I got no objection against the Chinese schools. My mother studied in a Chinese school from standard one to Form Five. But wasn't such an attitude which was supported by Guan Eng is a racist attitude?

So, Melayu tak boleh, Cina can, is that it Guan Eng?

Well, I'm putting all these personal thoughts on record here because I want to show it back to the stupid Malays and Bumiputera who blindly tag along the DAP's line when the shit hit their face five years from now.

At that time it's going to be too late, they will never get back what they had lost.

This posting was also meant as a reminder for  the stupid Umno people who still think that they can enjoy themselves after winning their party posts two months ago.

But of course they will ignore all these warnings and continue being the monkeys that they are....

Well, it's fated I guess.

Never mind, I think I will just find myself a Chinese husband and blend in the Chinese crowd once they take over everything.

Yup, that's going to be my plan.

Maybe one of these day I will ask that Chinese guy who occasionally belanja me dinner at fancy restaurants if he is really in love with me....

You all other non-Chinese better have some back-up plans too, okay...unless you really believe that the soon to be economically and politically powerful Chinese community led by DAP will not discriminate you lah.