MCA's not so bad new set of leaders

I never thought it would be this way

The first glimmer of hope for BN after GE13 actually comes today from MCA.

The MCA delegates apparently proved themselves capable of moving forward.

The new top leadership line-up of the party voted in today,

Okay, I admit, I am guilty of writing them off.

Looking at the line-up, I now believe that these new MCA leaders could get cracking and win back some of the support of the Chinese community.

The line-up is a clear departure from the previous one which was plagued with problematic characters, myriad of problems as well as scandals.

Liow may be a bit slow, but he is a relatively decent fella. Wee a bit arrogant but hopefully he could moderate it a bit so that the party can have good working relationship with the other BN component parties, especially Umno. 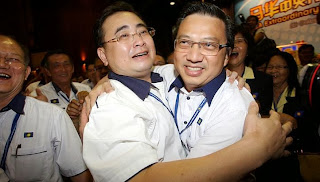 The others are relatively young and respectable.

I think the MCA delegates did better at transforming their party leadership compared to Umno which had insisted on keeping the status quo during their party elections two months ago.

At least they didn't keep their tainted leaders, real or perceived. There was also no serious infighting leading to this transition of leadership. Just a bit of noise, that's all.

I am looking forward to see what these new MCA leaders could offer.

Congratulations too to former MCA president DS Dr Chua Soi Lek who graciously step aside to give way to these new leaders to revive the party.

Hopefully, under the new leadership, the party's over one million members will vote for BN and persuade others of the Chinese community to do the same in the next general election and stop the racial polarization process of this country.

Hopefully it will happened. I really hate to hate the Chinese. My mother will be perpetually angry with me if I'm like that.
Posted by Annie at 20:15