I took an off day today. Been working through the weekend. Tired.

Went to Mid Valley to do some shopping.

It's Monday, but the place was packed.

My racial breakdown of the shoppers ;

65 per cent, the most oppressed group of Malaysians, the Chinese.

20 per cent, the most privileged group of Malaysians, the Malays.

15 per cent, Indians and lain-lain.

(The description given was based on Lim Guan Eng's "We (Chinese) don't want to be treated as second, third, fourth or fifth class citizens" speech.)

Everyone seems to be happy and shopping frantically.

Christmas songs were being played non-stop to add to the merry atmosphere. It's really a season of buying and giving, I guess. 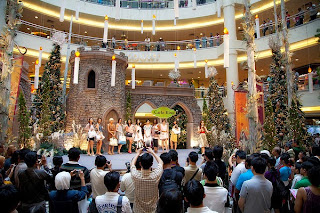 Not bad for them, who keep complaining that costs of living are getting higher.

Mid Valley is after all a premium shopping mall where things are not that cheap.

Those with more money did their shopping at the adjacent Gardens. The place, which is more up-market was less packed but not totally devoid of shoppers either.

Really not bad for business. People seem to still have quite a bit of money.

I guess the Umno crooks are not doing their job of stealing all the money, especially from the Chinese, properly enough. Apparently quite a number of the Chinese are still quite wealthy based on the number of them shopping at the malls.

But never mind, I am quite sure Guan Eng and the gang will not stop complaining about those Umno people.

I bought a few things myself. Lots of Christmas and year end sale. Still, they are not exacty cheap.

Went for a foot massage too. One hour for RM93.30. Not cheap at all. It's bloody painful but I felt good after that. I need my foot massage once every two weeks.

Had dinner at the food court.

At the next table was a Malay family. Father, mother, daughter and son. I believe the son is autistic.

The mother was eating some sort of soup, the daughter was having fried kuey teow, the son was eating roti canai. The father didn't order anything to eat. He was just drinking iced tea.

The mother and daughter, however, didn't finish their food. The father finished whatever left on the plates for them.

Well, tomorrow, I am going to work again.

Going to work through the holidays.

Will go on long leave after everyone come back after the new year holiday.