In the 1,000-strong ‘Super Saturday’ dinner organised by Kedah DAP, Lim tells the Chinese community in Gurun that it is important for them to maintain their dignity.

"Don't vote for BN, let them know that we are still determined with our stance," he says to loud applause from the crowd. Most of them are Chinese, though not all are Sg Limau voters.


That's how Guan Eng and his DAP gang build up the GE13 Chinese tsunami.

They drummed it into the Chinese psyche that they were being systematically discriminated by the BN government by painting the picture as if the Chinese community is being treated at the same level as the blacks of South Africa during the apartheid regime.

The fact that the Chinese as a community being the most successful and prosperous in the country were never mentioned.

This style of inciting hatred had created legions of fanatics among the Chinese community. 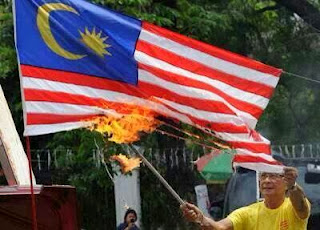 This is one of them as cited by the same Malaysian Chronicle report :

Tan Eng Hua, 58, gives a black marker to Lim and requests him to ink his signature on his balding head during the DAP ‘Super Saturday’ dinner.

The crowd cheers as Lim scribbles his Chinese name on Tan’s scalp, drawing some attention from shutterbugs.

Tan, a rice dealer from Kampung Batu 17 in Sungai Limau, says he was struck with the idea when seeing Lim signing his name on the party's mascot Ubah.

"I'll not wash my hair until the end of polling day," he grins.

You may read further about the Guan Eng's and DAP hypocrisy at Helen Ang's :

Of course Guan Eng as usual replaced the word Malay with Umno during his speech. He has to maintain his angelic stature and mask his actual message of Chinese being discriminated by Malays.

But he knows, that his actual message does reaches the Chinese crowd - that they must topple the Malay-led BN government. Even the MCA and Gerakan members know this as they voted in large number for DAP and its allies in GE13.

That's the modus operandi, make the Chinese hate the Malays so that they would not vote BN no matter how much they got from the government.

PM Najib Razak tried his best to win over the Chinese before GE13. He gave them almost everything they asked him to give to the community.

But blood is thicker than water. The hate sowed by Guan Eng and his gang had already seeped deep in their brain.

At GE13, after all that Najib did, most of them spat at his face. A mere 10 or 15 per cent of the Chinese community voted for BN.

The DAP tactics of sowing hatred among the Chinese towards the Malays by attacking the Malay-led government works. They sweep almost all Chinese majority constituencies.

Anyone who highlighted this tactic by DAP were attacked relentlessly as being racists by its cybertroopers.

This is a typical comment by one of the many DAP cybertroopers who appeared to have make my blog their permanent hang out place :

Anonymous1 November 2013 14:47
unfortunately... this sweet old lady has a despicable grand daughter named Annie that is so extremely kurang ajar to the Chinese community in the country.


And that comment came at my posting about my Chinese grandmother and got nothing to do with politics.

I expect more of those type of comments from the DAP cybertroopers in this posting.

They always come in droves whenever I write something about Guan Eng and his father.
Posted by Annie at 11:12