Cousin KH and a bit on English proficiency

Reached KL about 7pm as planned.

It appeared that the rain over KL had just stopped. The weather was however still gloomy. KL skyline looked like Gotham City as I drove on the DUKE highway. The setting looked almost perfect for a vampire movie.

The dark and sombre atmosphere brought my thoughts back to an earlier news today of the estimated 10,000 people who died when super typhoon Haiyan hit the Philippines. My prayers for their families and loved ones. I also thanked Allah that our country being mostly spared from such calamity.

Was winding down at home just now when my Singaporean cousin KH called asking me whether I'm okay. She had been trying to contact me the past few days but can't get through. I explained that I had mostly switched off my phone because I forgot to bring my charger when I went outstation the other day.

She scolded me for being so forgetful but as usual can't stay angry with me for too long. We are best friends since we were kids. She is also like my elder sister. My father once told me that before I was born, my mother always regarded KH as her own daughter. In fact, till now, I believe my mother still regards KH as her own daughter. Admittedly, I'm a bit jealous of her, but not because my mother loves her very much. It's because she is the most beautiful one in the family. And she is very smart and successful. KH runs her own business. She looks very much like this Korean actress, 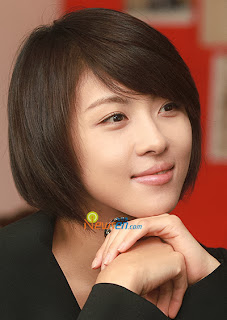 Really, I'm not kidding you, she looks like that.

Actually, KH looks exactly like my mother when she was young. My mother is indeed very pretty.

I'm on the other hand look very Cina Bukit compared to KH and my mother. My eyes were conspicuously very sepet and my skin not so fair.

Well, still, I love my mother and KH very very much.

KH told me that she is coming to visit me and my mother next month. Her parents are coming along. My mother will be delighted. She would get very excited whenever her sister and KH visit us.

And also as usual, KH got something she was not very happy about to tell me.

This time, it's about this story which is actually a few days old,

Malaysia has highest level of English proficiency in Asia

and the offending part of the story was this paragraph,

The nation also climbed two notches higher to 11th place from 13th position last year in the EF English Proficiency Index which saw over 60 countries being surveyed.
The results revealed that Malaysia, which was placed in the ‘High Proficiency’ category, had overtaken Singapore who fell behind to 12th position in the world ranking. Malaysia scored 58.99 points in the survey while neighbouring Singapore received a 58.92 score.

"It's not fair, there is no way your English is better than mine," KH said with much irritation in her voice.

I just laughed and said. "Eh, of course your English better than mine one, you study in Cambridge ma, but the rest of the Singaporeans how?

KH made some angry noises over the phone before she warned me, "We'll talk about this again when I get to KL."

Well, KH, who cares about such stupid survey lah. If you are good, then you are good lar. If not, still can talk using your mother tongue what.

Or maybe can try the not so classy Bahasa Malaysia....like what all those pejuang Bangsa Malaysia of DAP are doing nowadays. Right Guan Eng?

Er, YB Hannah Yeoh, you and your hubby teach your Bangsa Malaysia kids Bahasa Malaysia as first language or not?
Posted by Annie at 00:31