Of being young and on a bike again

There were so many bad news of late.

I read through them but didn't wish to elaborate as I don't want to claim that I know how it feels to be part of a tragedy which I only read in the newspapers or internet.

My sympathies were for those who suffered and if I can, I will try to help with whatever little that I can afford to do.

I used to think that I can do more or that I can actually single-handedly change the world for the better. I was younger and extremely idealistic. Now that I know better, I trimmed  down my ideals quite a bit.

Planted my feet on the ground, so to speak.

I'm always amused when I look at my younger colleagues, particularly those with the anti-establishment attitude, as they reminded me of myself not that many years ago.

I was chain-smoking and had more piercing adornments other than the solitary nose stud that I occasionally wear these days.

The world seems conquerable back then.

Well, the reality is quite different, actually.

There were so much at stake to be lost if we choose to be reckless in our pursuit for selfish satisfaction.

That's why these days I'm more careful with what I wish and strive for.

For instance, if you really want to get rid of what you deemed as a rotten government, please do be careful and make sure that the replacement is a sane bunch of people instead of a jumbled up gang of extremists whose only common interest is just to gain power over us all. Something like a mixture of Islamic fanatics, self-worshipping opportunists and hypocritical Chinese chauvinists combined together.

Nonetheless, it's not my intention to be preachy tonight. So, I leave it at that.

Actually, when I started this posting I had only wanted to write about some fluff, because when I read back through my previous postings, I found that I'm getting too serious about everything.

Well, things are quite tense for me of late and being alone most of the time doesn't help that much.

I really need to do something exciting again, other than spending my free time just reading books in my room.

I think I want to ride a motorcycle again, just for the heck of it.

I used to ride one many years ago when I was a bit younger. It was dangerous but fun.

No, I don't want some super bike or anything glamourous. They are too big for my size, anyway.

I'm going to just get myself a small kapcai, to ride around the neighborhood in the late afternoon during the weekends. 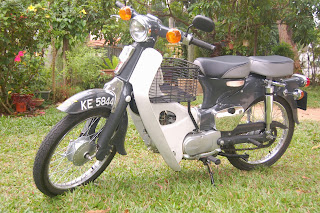 Ya, that would be nice and fun.

Once I'm used to riding the kapcai again, maybe I can then get myself a more powerful small motorcycle such as this one. 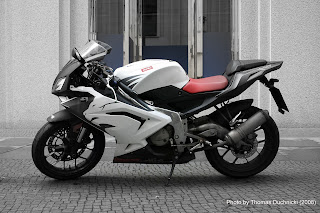 I think I can ride one of that for long distance trips to my favorite places.
Riding alone on the highway, without much cares in the world.

That would be cool, right?

Okay, I better take my medication and sleep now Lots of things to do tomorrow.

p.s To the person who had been sending me notes of advise on alternative medication, thank you very much. I appreciate that very much.
Posted by Annie at 23:23