Going back to the grind

Going to pack up later in the day for the trip back to KL.

It's been mostly a restful past one week.

Too bad that Lim Kit Siang spoiled it for me a few days ago when he attacked Dr Mahathir for no reason at all.

I admit, I was quite stupid to layan all those DAP cybertroopers yesterday.

I should just ignore them and carry on with my holiday.

I wished I had sticked to writing nice things during my holiday. That was what I was doing before the Lim anak beranak started to poke their head in Sungai Limau to stir up their chauvinistic shit there.

Well, all done and said and nothing much I can do about it.

Whatever it is, I did manage to have a restful few days.

My coughing had gone, but I can still feel the chest pain from time to time.

My next medical check up will be before end of this month. Hopefully it's nothing serious.

Later on my way, I planned to stop by somewhere near Ipoh to buy some Tambun pomelo. They are my favorite. 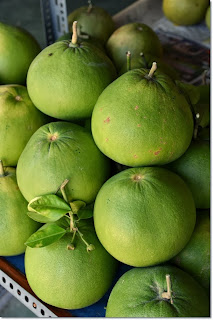 There is a stall at the highway's R&R near Ipoh selling the fruit from which I like to buy them. The aunty who manned the stall would advice me which pomelo are sweet and which are sour. The sour ones are normally the nice looking ones. For all the Malay extremists who are reading my blog, let me tell you that the aunty is Chinese and she doesn't seem to be the cheating type. So, chill, okay.

Well, as usual, one song for the road, and cheers everyone.