The blind hatred of DAP people

I have been accused many times of being a hate monger by the DAP people who came to this blog.

What these people however don't seem to realise is the hate they themselves posses in their heart.

A few postings back, I highlighted the unprovoked attack by DAP's Lim Kit Siang against former PM Dr Mahathir Mohamad during the campaign of the Sungai Limau by-election at When an old man can't let go of his hatred

Prior to that attack by Kit Siang, Dr Mahathir had been rather quiet. 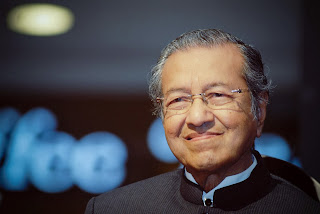 What I find most revolting in the following exchanges of barbs was that most DAP people think that Kit Siang is of the same level as Dr Mahathir.

1. Dr Mahathir's 22 years as PM was endorsed by the electoral process and Malaysia is the success it is now because of his leadership throughout those years. What had Kit Siang contributed to the building of this country during that period till now? Has he even achieved anything after more than half a year as the MP of Gelang Patah? Gelang Patah people, your life is better now with Kit Siang as your MP?

2. Dr Mahathir is an 88 years old retiree, while Kit Siang is an active 72 years old politician and MP. The DAP people don't seem to realise that Kit Siang is 16 years younger than Dr Mahathir. They are not even exactly of the same era.

Well, DAP people, what had Dr Mahathir done to make your life more miserable? You don't have enough to eat those 22 years under his leadership? Were you denied access to the internet and the freedom to bitch and moan all day long about your not big enough house, not fancy enough car, not prosperous enough business? Is that it?

To most of you who was not old enough to remember those times, ask your mom and dad how was their life all those years when this country was led by Dr Mahathir and how did they manage to afford giving you all that you have now despite claims by the likes of Kit Siang and son Guan Eng that your community were being discriminated and suppressed by Dr Mahathir's administration.

If Kit Siang was instead the PM, do you really think that your life will be in paradise, is it?

As a reminder of how full of hatred these people were, here are comments (most of which I find shallow) by DAP people praising Kit Siang and vilifying Dr Mahathir, which was selected for publication by the self-claimed independent editors of Malaysiakini :

Slumdog: DAP leader Lim Kit Siang, you are a true statesman and you always conduct yourself with dignity and decency, qualities that former PM Dr Mahathir Mohamad does not possess.Your eloquence in rebutting whatever Mahathir dishes out to you is said with decorum and intelligence. This is in contrast to Mahathir's usual vile and sarcastic manner in which he attacks his political foes.The legacy that Mahathir leaves behind with not be cherished by the majority of the rakyat but he will be remembered with much disdain.Swipenter: This is a classic case of David vs Goliath. Mahathir had everything at his disposal to get rid of Lim. He tried but did not succeed just like he tried to kill off his then deputy Anwar Ibrahim.Slowly but surely Lim is getting the respect and admiration of Malaysians for standing up to Mahathir and Mahathirism whereas the latter is receiving the opposite from Malaysians.Lim is not the only one who hopes Mahathir will live up to 100 years, so do millions of Malaysians. We all want him to witness the end of Mahathirism for himself for what it is worth.ACR: Someone commented here about Mahathir being a 'world leader acclaimed by his admirers and feared by his detractors'.I was once told by a reliable source who worked in Wisma Putra in the 1990s that all Mahathir's diatribes against the West and being seen as the leader of the 3rd World (mostly by despotic African tyrants) never made news in the West.Perhaps in some countries, a small corner of a newspaper tucked inside one of the pages on the deeper end of the paper would carry his news. Why would the West bother about some noisy third world leader of a nation of 20-25 million?What Mahathir did do in this regard was to create a civil service with ego of 'ketuanan' inflated proportions that some officials in Wisma Putra had the audacity to remark that the international beggar was in town when Nelson Mandela visited Malaysia in 1993Yeoh Chee Weng: When the common Malay realises and speaks up against all the ills that were begotten from the decades of the ex-PM's twisted mentality to institutionalise racialism and mediocrity, then finally would Malaysia mature and achieve developed status. May this malevolent PM live to see this day.Onyourtoes: Saudara Lim, you should just let the people, the commentators here and everywhere to defend you. The whole world knows you won hands-down.You represent integrity, principle, and competency. He represents duplicity, dishonesty and mediocrity. You are a democrat; he is a third world tribal chief. You are in politics for Malaysia and its people. He is in politics for himself, his family, cronies and friends.You sacrificed, suffered and agonised, he exploited, enjoyed and lived lavishly. You are respected home and abroad, he is despised everywhere. You can walk with your head high; he will only sigh.Funny, the Abrahamic monotheist people should understand their destiny better. But not this one.Crazy Analysis: I agree with Lim. I like to see Mahathir live very long although I am many years younger than him. In fact, he should outlive me. I love his 'contradicting jokes'. I want to die listening to his jokes and I wish he will continue with his jokes on the other sides we arrive.Each time he will say different things and make you so confused that you can't make it out what is said. Anyway the real joke is that he himself claims he has "retired" from politics.Atilla: A well and meaningful reply to Mathathir's sarcasm. A mark of a well-respected and responsible leader unlike those in Umno who say things without using their brains.It is very obvious that Mahathir still craves the influence and power that he once hold and that explains why he is so bitter that he no longer calls the shots after he stepped down. To try to get into the spotlight, sadly he turned back to his radical ways and has lost whatever respect he had over fellow Malaysians.JTC: We want Lim to live for a long time more. We also want Mahathir to live for a long time too. The only difference is that we would prefer if the latter was kept in jail and that the key thrown away.Clever Voter: The reality is that the feeding chain that Dr M has not created many loyalists but also many dependencies. They are also proxies who have chose to remain silent.Dr M may seem to have lost political support his influence is not to be underestimated, and the potential trouble he can create cannot be ruled out. Lim is not a threat to him but more as an irritant.FairGame: Nobody is afraid of Mahathir's shadow. But Mahathir is definitely afraid of all the skeletons in his own closet. He is truly a forlorn and pathetic old man.Even in his twilight years, he is still full of bitterness and hate. He is even not at peace with himself, which truly shows that in the event of his demise, he will not go peacefully.Trublumalaysian: An ode to Mahathir: "Surely if living creatures saw the results of all their evil deeds, they would turn away from them in disgust. But self-hood blinds them, and they cling to their obnoxious desires. They crave pleasure for themselves and they cause pain to others; when death destroys their individuality, they find no peace; their thirst for existence abides and their self-hood reappears in new births."Thus they continue to move in the coil and can find no escape from the hell of their own making."
Posted by Annie at 10:27