Please check the UEM and Ascendas project in Nusajaya

Since I have been going around the past two days writing about the Johor's Ramsar sites being slotted to be bulldozed for "development", let me tell you all a bit about an industrial park to be built at Gerbang Nusajaya, which is not far from  those protected areas.

The industrial area is a joint venture between UEM Land Bhd and Singapore's Ascendas Group.

Total cost of the project on a land area of 207.6ha is about RM3.7 billion. It's dubbed as an "integrated technology park".

Ascendas have a controlling 60 per cent stake in the project while UEM, which provides the land have the remainder of the shares.

It is also to be located not far from all those posh places built in Nusajaya, including Legoland, EduCity, Medini, Puteri Harbour etc.

This industrial area was described by the developers as being very environmentally friendly that you can probably live next door to its factories and be fine about it.

The thing is, being a Johorean, I never really trust the Singaporeans when they say they are coming in and be environmentally friendly about it. There are too many dirty Singaporean factories in Johor which employ totally foreign labour.

Upon checking, I was told by reliable people that the whole project had failed to gain favorable review as it was not going to be in accordance with the Environmental Impact Assessment (EIA).

The main reason being it's too near the Ramsar sites. 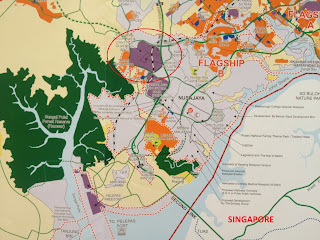 The Ramsar site of Sungai Pulai is in dark green while the industrial area is in the circled puple colored area.

I would like suggest for the Department of Environment to stand up and do something to prevent the so-called environmentally friendly industrial area from being turned into another place in Johor where Singapore industrialists dumped their polluting assets which can't pass the strict environmental laws in their country.

Not only these polluting factories could potentially cause environmental nightmare in the Ramsar site, Nusajaya and its surrounding area, they are also labour intensive which needs thousands of foreign workers to be brought in and consequently caused Johor to incur serious social costs.

Well, I'm hoping I'm wrong, but the authorities need to check on this matter.

I think bosses of the enforcement agencies in KL should go on the ground and check on whether their people are doing their job or were they actually in cahoot with the crooks.

How I wish PM DS Najib Razak could go down to JB and thoroughly check and prevent his subordinates down there from being turned into budak-budak suruhan (servants) by the crooks as they rape and plunder Johor.
Posted by Annie at 08:05