PM Najib, please save the Ramsar sites in Johor

I'm actually not well and not in the mood to write these past few days.

But I just found out something which is really not right brewing in Johor, my beloved home state.

That's why I'm forcing myself to write this in the hope that someone could forward it to PM DS Najib Razak, so that he could do something about it.

To tell you all the truth, I had actually given up on Johor when the new MB DS Mohd Khaled Nordin, through his political secretary ordered just weeks after becoming menteri besar to get rid from Kota Iskandar people who used to work for his predecessor Datuk Abdul Ghani Othman.

Well, when Umno people started being so cruel to fellow Umno people, then that's a clear sign that they are doomed. That's what happened in places such as Selangor, and at one time in Kedah and Terengganu.

Then, I also started hearing all sorts of nonsense from Johor.

KPRJ now has a Big Boss. Guess, how much is his salary? I'm not going to tell. You check for yourself. Otherwise you would think that I'm jealous and trying to smear his name. Bear in mind that this is KPRJ, which was set-up to take care of development in rural Johor. Now it is acting as if it's some big corporation, paying humongous salaries to those who were politically connected.

A few weeks ago, senior pro-Umno Johorean blogger A Voice in his posting A stone throw could hit a Datok wrote the following

In our posting on the stripping of Datokship here, blogger Life of Annie left a note to remind that there is always two side to a story.

Although the posting was just us rambling our thought and not definitive like journalist reports, we appreciate the reminder.

It would have been great had she shared what she knew. If we had made up our mind, at least for the benefit of readers. Other sources did came to tell us more stories on the stripping of Datokship.

It is not that I do not want to reveal everything that I know, but what is the point of me doing so? Honestly, it's one fight that I definitely cannot win as I will be up against very powerful men. Even A Voice actually knows about this.

I was told that the person involved in the Johor's sekolah agama (religious schools) project as pointed in the earlier posting by A Voice doesn't want to be defended.

So, I'm letting it goes as that.

But for those who are still curious about the sekolah agama Johor project, please check with people at Kuwait Finance who were involved in managing the loan for the project or those from Jabatan Agama Islam Johor if you are really interested to know the truth about it. I don't want to be the one who reveal it here as I don't want to be accused of these and that. This involve sekolah agama after all.

As for the latest on the project, my sources in Johor told me that the brave people at the Economic Planning Unit and Jabatan Agama Islam Johor had defended it and the project will proceed under the original developer appointed by the former administration with 90 schools already under construction.

The remainder of about  30 schools will be built by contractors appointed by the new gang in control of Kota Iskandar. Let's see who will get the contract, how it's going to be financed and most importantly whether it will be di Ali Baba kan.

Now, as for the latest nonsense in Johor which really worries me, some clever people have the bright idea that they should develop the area now covered with mangrove forest designated as Ramsar site at the edge of Iskandar Malaysia. 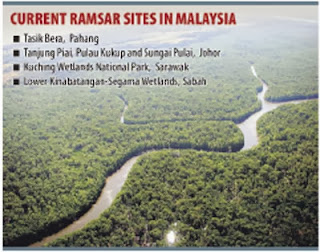 To know about Ramsar sites, please go to the


The whole thing is yet to be set in motion but I know that many decent people at Kota Iskandar were having a head ache on how to stop it from happening.

If even the Ramsar site could be bulldozed for profit, just imagine what will happen next. They will claim that it's for development, but the truth is, the whole thing was just for these people to enrich themselves. These are the orang-orang yang khufur nikmat.

Yes, I know they haven't even started yet, but what's the point on us making noise after the whole thing already started and the damage already done.

For me, only PM DS Najib Razak can put a stop to all these nonsense in Johor. He need to do something about it. Otherwise BN can say goodbye to Johor, the third richest state in Malaysia, after the Pakatan-ruled Selangor and Penang.

p.s To Khaled's boys, please be a bit more discreet when you all ask for direct nego contracts from the authorities. People are angry and talking.
Posted by Annie at 10:20