Loving the British Royal family for an odd reason

Apparently the whole of United Kingdom of Great Britain as well as many part of the world were overjoyed by this news,

Even the writer of that AFP report appeared to be overwhelmed by the excitement. She/He repeated several facts in the story such as the weight of the baby and how happy were the father, grandfather etc. Even, US' Obama's happiness was recorded in the story.

And AFP is French, which is very much a republic. They used to chop off the head of their king and queen as well as most of the nobility.

Now, what makes the British royal family so loved by its people (as well as other people who do not really have anything much to do with them, such as Malaysians)?

Honestly, I believe the UK would be just fine without them. Republic of United Kingdom sounds quite okay to me.

Anyway, most of them are not really that handsome or pretty to look at either. Even William, the newly minted daddy, who used to be a bit handsome is now getting distinctively bald...and Charles, after Diana death, had to marry that Camillia instead of some super model or Hollywood starlet.

Well, I think the real reason why they were so beloved among the Brits and others was because of the tradition that they represent and the way they conduct themselves as royalties.

They know their role in the constitutional monarchy system and didn't do irritating things such as meddling in the administration of the state.

They didn't take anything from the people and they didn't try to use their position to enrich themselves at the expense of the people.

On top of that, they respect the fact that the government, elected by the people must be allowed to do its job without having to worry about things such as Queen Elizabeth wanting a cut from certain development project or one of her sons, who is a Chelsea fan insisting for the immigration department to expel that dastardly Portugese Jose Mourinho from the country for not managing the football club well.

As for myself, I kinda like the British royal family because I think they are a sporting bunch of people.

For instance, they don't go around initiating legal suits against the Black Adder gang for sketches such as this,


By the way, in case you don't know it already, the guy who acted as the royalty in the sketch is James Hugh Calum Laurie, who is better known for the more popular character he played, Dr Greagory House. 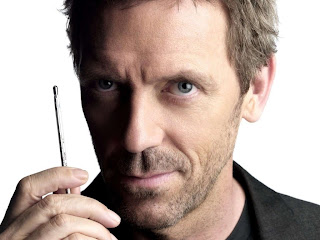 Hughie was awarded the Order of the British Empire by the British Royal Household despite all those portrayals which depicted a royalty as a stupid git....but of course a lovable one at that lah.
Posted by Annie at 10:12