Just only a few good men

The rain outside had just stopped. I'm just laying in bed feeling a bit bored.

A friend from Johor had earlier called to chit chat. He is still looking for a job, almost two months after GE13.

Such is the way it is for those who work for politicians.

He is one of the good guys who never used his position to enrich himself when he was in a position of power before the election.

He insisted that he is okay despite his currently jobless status.

"My conscience is clear. That's worth more than anything else," he said, adding that he regrets nothing for serving an incorruptible boss who always insists on his subordinates to maintain the same principals as himself. 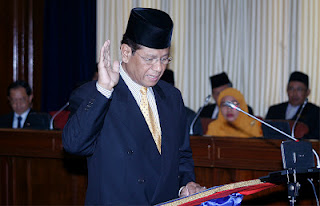 I admire this friend of mine. There are not many like him around.

Most of those who know him always thought that he is already rich for being in a position of power and influence for so long.

"Don't bluff la, surely he has by now become very rich for serving his boss all those years," said one of my friend's detractors not too long ago.

To those like that, my friend being an Umno worker could never be clean of corruption despite no evidence which could prove his guilt.

But I know that he is not rich at all as he has always been very strict in adhering to his principle of doing his job according to how it was supposed to be done.

Anyway, I don't think I can be like him, being so cool despite the prospect of hardship. After all, it's going to be Hari Raya soon, and he is still out of work.

A lot of people assume things as according to how they themselves would had acted under the same circumstances.

Those who accused or assumed people of misdeeds such as corruption tend to be themselves susceptible of such acts.

That's why my friend was alleged to be corrupted. Those who accused him actually were themselves prone to commit those corrupt deeds if given the chance to do so.

I hope my friend will soon find himself a job. I know that he needs it. He has a family to take care.

I hope the good guys will win and be rewarded in the end.

But for those who are truly corrupted, I hope they will continue to rot in their unclean thoughts and deeds.

There are many of those in positions of power now.
Posted by Annie at 01:10