I had been to China and hang out with some of the communists there.

I had directly asked them how it feels to be a communist and their answer was equally direct - they are proud to be communists.

It was actually like asking a Malay in Malaysia what it feels like to be a Muslim.

Being a communist in China is after all a recognition for being the best among the  lots. There are about 80 million communists among the about 1.3 billion people in China.

They are really normal people, not unlike those in Malaysia. Some are nice and friendly, and some are little irritating pricks just like those who tried to push me around in my office.

Ok, I will get back to discussing these China's communists later at the end of this posting.

Well, now that there is this brouhaha over the pro-communist New Village film, Lim Guan Eng had came out criticizing Khairy of Umno Youth for trying to stop its screening by saying that the later was being hypocritical as he and his organization had formed a tie with the youth wing of the Communist Party of China.

Guan Eng as usual was being a silly little irritating prick. How the Chinese of this country could support him is beyond me.

For him, the whole thing was not actually about defending freedom of expression or freedom of speech or even the right of the communists to be remembered as contributing to the independence of this country. Those were all actually bullshit to him.

For Guan Eng, it was all really about defending anything Chinese, so that DAP may continue to hold its grip of influence among the country's Chinese community.

It was all about DAP's interests and nothing else.

It was the same as when his father, Kit Siang attacked the May 13th film Tanda Putera,. It was not about preventing racial unhappiness or anything like that. It was really just because Kit Siang was trying to avoid DAP being identified as a perpetrator of the incident in that movie.

Honestly, I don't really mind the New Village film being screened. There should be freedom of expression in this country.

Heck, I don't even mind if all the Chinese in this country wish to be communists. Let's see if they can stand being a real communist. After all, being a communist means sharing everything you got with you fellow citizens, which I found that the Malaysian Chinese generally are not so good at.

As for the Chinese of China who hanged out with me. Despite them being so proud of being communist, they are not really communists for all intents and purposes.

The way I see it, for them being a communist is just a status symbol in their country and a mean to get ahead in life.

Most of them are actually as capitalistic as any other capitalist.

If you have a chance to go to Beijing or Shanghai, do take a walk in the more affluent districts and you will see cars such as this, 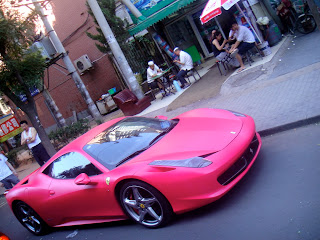 If you stop the driver and asked, I'm quite sure he/she will proudly say he/she is a member of Communist Party of China.

And that from a communist living in a country which is the world's second biggest economy but with a population mostly still lives in poverty.

As for all Malaysians who pretend to defend the communists such as Guan Eng, I hope they too can just stop being hypocrites and openly admit the real reason they are making so much noise.

Yes, Guan Eng and gang must admit that by defending the New Village film, it is not really freedom of speech or even the ideals of communism that they are defending, but instead it was all about upholding Chinese chauvinism, which had enable them making such a huge gain in the last general election.
Posted by Annie at 06:57