Dinner with Ma, Pa and the Chinese guy

The guy who occasionally dates me turned up for dinner last night.

It was my mother who invited him. She was all excited the other day when I told her I'm seeing someone and pestered me to invite him for dinner.

Last night, he picked me up at my place and then we went to my parents' house in Subang Jaya.

My mother cooked her "refreshing" Chinese dishes for the occasion and forced my usualy missing father to be present.

I'm not sure what she was all excited about. Maybe she was hoping that I'm finally going to get hitched.

Actually, I don't think I even want to get serious with the guy because at the moment I'm feeling all very semangat Melayu most of the days.

Well, I think I actually just go out with him more because I'm lonely and no one else seems interested in me and that he can afford to buy me nice dinners.

But my mother seem so happy to meet the guy that I don't have the heart to spoil it by telling her that I'm not all that crazy about him.

He was his usual charming self and my mother was all won over.

My father was his usual quiet self but seemed to be okay with him.

Throughout dinner, my mother and him occasionally lapsed into Mandarin whereupon I had to remind them to switch back to English because my father doesn't speak or understand the language.

I didn't insist on us speaking in Bahasa because he doesn't speaks it very well. In fact, I hardly speak Bahasa with my mother too because she speaks a very proper officious Bahasa like some Chinese who are trying too hard to speak the language.

My mother and him, both being DAP supporters just couldn't help to talk a bit about politics. Knowing that I'm a BN supporter, they tried to convince me that DAP is not a racist party, that it was not a Chinese tsunami but actually an urban tsunami, that the Chinese voted en-bloc for Pakatan not because of racial motivations, but because they want a clean and efficient government.

I was like, well, whatever....I don't want to argue about those things at dinner. I'm tired of them. I also wanted to quickly finish the dinner. I know if I opened my mouth, I may get stuck in a quarrel.

My father was all just quiet, until the subject of Singapore was brought up. My mother and the guy, both being the typical DAP supporters are fond of Singapore. They talked about how efficient everything are there and everybody are being treated equally, including the Malays.

My father said he agreed that Singaporean Malays mostly say good things about their country. He mentioned how the Singaporean Malays are doing well and that the republic's mostly Malays Lion XII team had even recently won the Malaysia's Super League, thus proving they are capable of outperforming their fellow Malays of Malaysia at least on the football field. 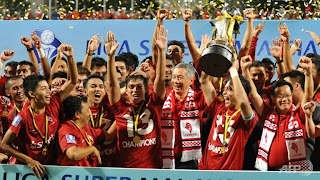 "And I think that the Malays of Singapore genuinely love their country and will support the PAP in the country's coming general election," my father said.

"Lee Hsien Loong may not have done as much for the Malays of Singapore as Najib had done for the Chinese of Malaysia, but he surely will get their support.

"By appearing to support a mostly Malay football team is enough to convince the Malays that you are their friend. Malays are that easily won over," my father added.

My mother, knowing very well that was my father's signal that he had had enough of the Sino-Malay political talks, smoothly changed the subject.

The rest of the evening, they instead bored me to death with talks about economics and how to make more money at the stock market.
Posted by Annie at 10:50