Both BN and Pas are going to announce the name of their candidate for the coming Kuala Besut by-election tomorrow.

Despite the specter of a hung state assembly in the case of a Pas win, this is perhaps going to be the most unwanted by-election ever.

Both sides seem not all that excited to go to battle again, so close after the bruising GE13.

The much divided BN Terengganu is still in the process of assessing the damage it had inflicted upon itself during the election, while Pas hardly thinks it can do much to overturn the BN's over 2,000 majority in that constituency.

Terengganu BN chairman and Umno chief DS Ahmad Said is not likely to even enjoy going to Kuala Besut, the stronghold of his rival DS Idris Jusoh.

Pas on the other hand may not really fancy going to battle, knowing the chances of them winning to be very slim. There are not even that many Chinese voters in the constituency to help them turn the tide.

Others do not seem all that excited too.

I don't think Lim Guan Eng is going to help with the campaigning there. This is Melayu punya hal and he knows that showing his face in Kuala Besut will not help  Pas' chances that much.

The fact that the by-election will be held during the fasting month will makes it even more boring as people like Pas' deputy president Mohamad Sabu may find it hard to spice up their ceramah. They need to appear extra pious during the holy month. For once, there will probably be no bad mouthing of DS Rosmah Mansor.

It is therefore not surprising that stories about the by-election were rather mundane so far.


You can click on the link above to get details of the guy (the good stuff) which were probably written in the Malay version of the Wikipidea by one of his die-hard fans.

This guy is as popular as Harian Metro among a lot of Malays. He is a cross between Mat Sabu, Harun Din and the not so funny Senario comedy troupe.

His popularity reached a new height not too long ago after he was spotted driving a Ferrari. It was later clarified that the car actually belongs to a friend.

And here is Azhar on his wedding day, also not too long ago. 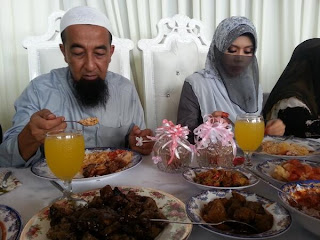 And here is Azhar in action at one of his ceramah.


If Azhar is indeed to be named as Pas' candidate for Kuala Besut tomorrow, I'm quite sure the by-election will be more meriah. Most Malays love these sort of stuff, I think.
Posted by Annie at 14:28