Pakatan, or to be more precise PKR had yesterday filed a suit to annul the results of GE13.

Media which sided with Pakatan tried their best to make it seems as if the whole thing is the most important news in the whole wide world of Malaysia.

Words such as "a landmark case which will determine the future of Malaysia" and "Pakatan going for the jugular" were bandied out to give the impression how important the Pakatan's decision to sue for a reelection.

The truth however is that, the charade was all about saving the face of DS Anwar Ibrahim whose Arab Spring-wannabe Blackout 505 protest ended with a whimper following the failed rally at Padang Merbok, KL last month. 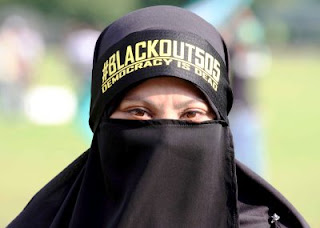 Anwar and his followers know that they can't muster continuous support even among their own party members to keep alive the notion that BN had cheated in the general election.

It is so because any reasonable man knows that the whole claim of cheating during the election was hogwash.

That was why they need to come out with some face saving maneuvers and what else is of better convenience other than a legal suit.

This is the usual tactic employed by Anwar and the gang in the event they can't refute BN's argument. Sue to silence, is indeed the usual Anwar's gambit even before GE13.

In this case, if any quarter, including their own party supporters questioned what happened to their Black-out 505 initiatives, they would turn around and said the matter is pending in court - end of argument.

Whether they win or lose the case later on doesn't really matter as the objective is to create the perception that they didn't lose their claims that BN had cheated in GE13.

Well, even if they lose the case, they will still turn around and say that the court had been under Umno's control and such.

Anyway, it should be kept in mind that this case will take a long time to be resolved and by the time it's done, the public will forget all about it, the same as it was with Anwar's Sept 16 claims about BN's wakil rakyat jumping ship back in 2008.

Another thing which should be noted is that, if Pakatan is really serious about wanting to annul GE13, then they should have Pas pulled out from the ongoing campaigning of the Kuala Besut by-election.

What is the point of them contesting that by-election if they are sure that BN will collude with the Election Commission to give victory to the coalition.

Do note, that the DAP has been very quiet over all these nonsense. Guan Eng and his gang are probably sniggering as they look from afar the antics of their less than intelligent Malay allies.

Oh ya, also do bear in mind that the cost of GE13 is over RM400 million. Don't tell me that we are going to spend that much again so soon just to satisfy Anwar's craving for power.
Posted by Annie at 14:15