This story was in NST today,

No contest likely for top five posts in Umno

KUALA LUMPUR: The Umno election, slated to be held later this year may not see any contest for the posts of president, deputy president and vice-presidents. 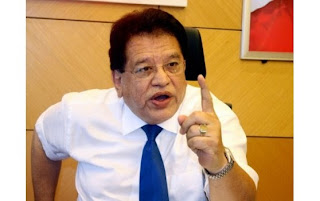 Speaking to reporters at Parliament House, he said most Umno grassroots did not want any member to vie for the top posts as it might undermine the party's strength.
"That is the general opinion that I have gathered after visiting several divisions recently. We in Umno believe in guided democracy. In democracy, anyone can challenge anyone for a top post, but if it will destroy us, why should we do it?"
He, however, added that there should be contests for the top posts for the Youth, Wanita and Puteri wings.
"People on the ground feel that this is the way if we want to be a stronger party. In fact, we did well in the last election when we won 88 seats compared with 79 seats in 2008," he said.
Elaborating, Tengku Adnan said such a policy of no-contest would benefit the party as it would promote the spirit of muzakarah, or discussion.
"We should all just sit down and discuss who the best persons to lead the party are."
Commenting on whether it was appropriate to hold the Kuala Besut by-election during the month of Ramadan, Tengku Adnan said no problems would arise and that the by-election would go on as planned.
"There shouldn't be any problem with that. If you recall, the same thing happened exactly 34 years ago. The Kuala Besut state assemblyman then had died at the same place and on the same date," he pointed out.
Tengku Adnan also quashed speculation that a biometric authentication system would be used to verify the identity of Umno grassroots members at the party's branch meetings nationwide.
"No, the biometric system will not be used.
"However, we will scan the identification cards of members to ensure that the people who come from branches and divisions are the correct delegates."
I had highlighted the parts which I think is important.
Ok, my little bit of suggestions to Umno,
Get rid of the party election altogether - If there is not going to be any contest for not just the number one and two posts, but also number three, four and five, then I think there may as well be no contest for the whole supreme council, Youth, Wanita and Puteri posts too. And while we are at it, I think Umno should not even have election at division and branch level.
Or, if Umno wants to maintain a facade of being a democratic party, despite not being so, then it should consider this,
Go the DAP way - Umno should consider adopting the DAP way of having a CEC election and then those who got elected decide who should be the president, deputy president etc. The result of the proposed Umno's CEC election should also be rigged just like  what the DAP did so that the end result will strengthen the party and reflects the affection of members to the party leadership. I don't think it's wrong to emulate DAP which is the most successful party in the country at the moment.
Meanwhile....heck, why bother....I'm going back to sleep....
Posted by Annie at 13:24