Imagine that Kim Jong Un is a Muslim and North Korea is an Islamic country.

And they have this, 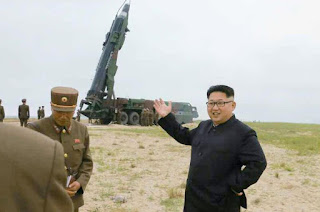 Well, I don't think chubby face Kim would ever get to that point in the first place if he's Muslim.

America would had bombed him out with the rest of North Korea back to the pre-dinosaur age even before he could say "annyeonghaseyo".

I'm quite sure China, Russia and the rest of the gang would not say a word.

That's my thought when I read all those news about the current tension in the Korean peninsular.

Poor America, this time they can't simply smack Kim like they did to all those Arabs.

Good for Kim that he only threaten to nuke mainland US rather than use his nuclear missiles to wipe out Israel like all those Arabs would have done if they have such an arsenal.

Otherwise, I think America would had bombed North Korea, irregardless of Chinese or Russian protests.

You see, Israel is actually mightier than America. It can order the super power around.

Really, that's how it is between Israel and America.

Anyway, Kim and his country are indeed quite a bit of nuisance.

We had our own little trouble with them just a while back when Kim's brother Kim Jong Nam was assassinated James Bond-style at KLIA a few months back.

There were quite a bit of fuss at that time.

Now it's rather quite quiet and probably things were back to normal.

Except for that incident, Malaysia is actually quite pally with North Korea.

We have been good to everyone.

I'm okay with that, though. As long as they didn't disturb us, why disturb them, right?

Hopefully Kim and gang will not one day aim their missiles at us.

That would be terribly rude of them.

Anyway, on another matter, things seemed to be getting worse with the Rohingya people of late.

They got kicked around quite badly and more were driven out off their homes in Myanmar over the past weeks.

So much with Myanmar's Noble Peace Price winner Aun Sang Su Kyi being in power there now.

It's a real case of ethnic cleansing and should be treated as such.

Too bad for the Rohingya people that the world seemed a bit slow to react to their plight.

Maybe that's because they are Muslims or maybe it's because of their skin colour.

If they are European with blonde hair and blue eyes, maybe the world would have reacted faster.

Okay, the Bosnians are European but the world was quite slow too when they were slaughtered by the Serbs in the 1980s.

But then again, they are Muslims.

Rohingya's case is worse. They are Muslims and not Europeans.

Well, that aside, I think we Malaysians do have the right to say something about the plight of the Rohingya people.

That's because we are hosting hundreds of thousands of them who fled to this country.

It's not because they are Muslims, okay, but because we can't be hosting them forever here.

If suddenly a few hundred thousand people in China were prosecuted and they flee here, we should protest to China too, despite the refugees being non-Muslims.

And of course we have to help the poor prosecuted people from China too.

In the meantime, we should pressure their government to take them back and treat them better.

I think that's what our government is doing about the plight of the Rohingya people.