I guess by the time I'm writing this, most of you all have already read the latest posting by Tun Dr Mahathir Mohamad, which was simply titled

It's basically a recap of what transpired over the past weeks and his lament of the current situation.

Dr Mahathir seems to agree that the rebellion has not much room to maneuver after the recent crackdown.


44. With the PAC, and the Task Force paralysed and the A.G. sacked, investigation work on the 1MDB and the 2.6 billion in Najib’s private account grounds to a complete halt.
45. Najib is now safe from being charged with illegally amassing funds. His claim that it is to be used for the coming elections is half-true. He had always said that cash is king. With the huge funds at his disposal he would be in a position to bribe his way to victory. He may also use the money to rig the election.
46. What Najib is doing is unprecedented in Malaysia. The people are at a loss as to what to do. The prospect of Najib continuing to rule this country is utterly depressing. The Malaysia where elections can even see opposition parties winning whole states will be no more.
47. Democracy is dead. It is dead because an elected leader chooses to subvert the institutions of Government and make them his instruments for sustaining himself. There is no more democracy for anyone to undermine. Certainly talking about 1MDB will not undermine something that no longer exist. If anyone should be questioned by the police, it is Najib.

I had last month wrote on

How they probably going to get Najib

It was to charge the prime minister in court for committing something illegal.

As admitted by Dr Mahathir, that's not likely going to happen now.

So, what else there is for the rebels to do other than making lots of noises?

I think the most they can do now is to persuade Umno members to pressure their president to step down.

But I doubt that it will work.

Umno members are not that brave, anyway.

And almost all of the division leaders and supreme council members are with Najib.

The noises will nonetheless continue, Najib will ignore them, and the rest of us simply have to bear the gloomy mood for days on end.

But that's how I think it's going to be, at least until the next general election.

Meanwhile, Najib in his latest posting expressed his wish for Malaysia and Singapore to keep on

Moving Forward in a Spirit of Mutual Benefit

in conjunction with the republic's 50th independence day.

My young Singaporean cousins, along with their Malaysian or ex-Malaysian parents took part in the celebrations during the weekend. 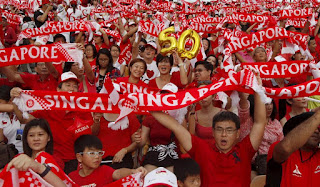 They have such a small country yet they can be so proud of it.

At the moment, we in Malaysia have a lot to sort out first before we can move forward with the Singaporeans, as per Najib's wish.

I wonder how are we going to celebrate our Hari Merdeka at the end of this month....it's so gloomy now.