KJ is the man...but not now ya

The truth is, I was indeed just horsing around when I wrote this,

The guy who I think can replace Najib

Come on, there's no way Khairy Jamaluddin can jump over so many heads to go straight up to the top now that his father-in-law is no longer the PM.

Of course he is handsome, smart, sexy, stylish and lots more, 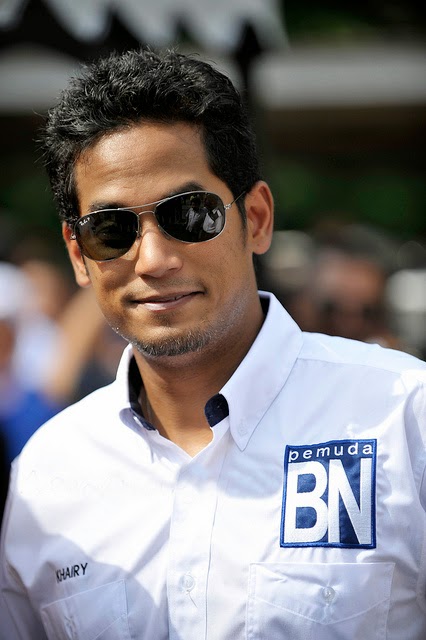 ...but for him to replace PM DS Najib Razak right now....naaaahhh, cannot be lah.

Honestly, I wrote that post just to get the kicks out of getting the response from you all dear readers of this blog.

And for that I got 42 comments for the post, which is quite good for this insignificant anonymous blog.

However, just now I saw this post by OutSyed the Box,

Syed Akbar Ali, who runs the blog, known for its anti-Najib stance, reproduced this "exclusive" article from the pro-Najib portal MyKMU.net,

For a while there, I was praying that the KMU guys didn't get the idea to write the story after reading my posting on KJ...okay, probably not....nanti orang kata perasan pulak.

Anyway, according to Syed Akbar,

The Pemuda UMNO has since released a statement refuting this claim by the MY KMU boys.

Nevertheless, I need to point it out here that I do stand on what I wrote about KJ being the best candidate among the top Umno leaders to replace Najib based on his handsomeness and other credentials.

The other candidates are simply not as handsome, smart, sexy, stylish and a lot more compared with KJ.

It does not however means that KJ CAN replaces Najib NOW.

That would be too ridiculous, okay.