Jazlan is chubby but he's okay

Two days ago, a friend called and asked whether I'm a friend of DS Nur Jazlan Mohamed, the chairman of Public Account Committee (PAC) and Pulai member of parliament. 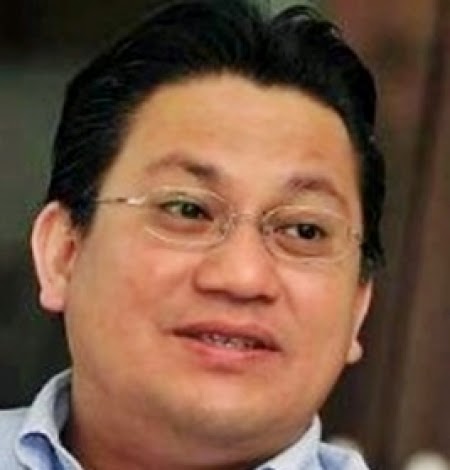 For some unknown reasons, my friend on the other end of the line seemed amused by my answer.

Well, I actually know Jazlan, but I don't think I'm in a position to claim that he is my friend.

It's not like we chit chat all the time or me regularly giving him advices such as on how to lose weight or something like that.

Jazlan may also not like it that an insignificant anonymous bitchy blogger going around claiming to be his friend.

If I'm a kinda hot babe, then maybe it's another story la.

My friend proceeded to ask me whether Jazlan and his PAC gang can be trusted to  investigate 1MDB following the ongoing assault by former PM Tun Dr Mahathir Mohamad against PM DS Najib Razak and his administration.

The 1MDB issue is the most crucial point of Dr Mahathir's attacks.

Well, I'm actually in favor of trusting Jazlan on it.

He is not exactly my favorite politician but the guy does has a certain amount of integrity.

He is definitely not one of those disgusting ass-kissing stupid bootlickers within the Umno rank.

If he does need to do a bit of apple-polishing, he would normally had done so without making someone like me feels too disgusted.

For one thing, I don't mind Jazlan too much because he dares to be different, which I think was what deterred him from being appointed a minister.

Some Umno people have even accused him of being a Pakatan's Trojan horse because of his rather liberal and unorthodox opinions on things.

The last time I talked to him face to face was just before the last general election.

He told me that things were not really good at his mixed Pulai constituency. True enough, later on polling day, his over 20,000 majority was slashed to just above 2,000.

Despite being half Chinese like me, he was almost swept away by the Chinese tsunami.

Jazlan, who is now 49 said he was ready to quit politics if things don't improve.

An accountant by profession, he had told me that it was not really his wish to be a politician in the first place as his real interest was to be a businessman.

It was his father, the late TS Mohamed Rahmat who persuaded him to get involved in Umno.

I also know that Jazlan at that time was frustrated that he can't do more than being a chairman of the troubled UDA.

So, when Najib appointed him as the PAC chairman, I did remember telling myself that the PM did the right thing.

I think Jazlan will try his best over the 1MDB mess. He knows that all eyes will be on him and therefore he is not likely to do anything which makes him look like a donkey.

However, I don't think it will make much difference to the ongoing Dr Mahathir's attack against Najib.

Read this, if you want to know why I said that;

Hmmm...Jazlan said it will take years for the PAC to complete its report on 1MDB.

Well, unfortunately, we don't have that many years to wait for Jazlan and his PAC gang to come up with their 1MDB report.

The next general election is less than three years from now.

If things go on the way it is now, there is a very high probability that Jazlan may no longer be Pulai MP or PAC chairman after that.

The last time I went down to Johor Baru several months ago, an old friend who is a senior SB officer told me that all parliamentary constituencies within the Iskandar Malaysia development corridor will most likely be swept away by Pakatan in the next general election unless BN do something really drastic there.

Jazlan's Pulai is one of the constituencies, with the others being Kulai, Gelang Patah, Johor Baru, Tebrau, Tanjong Piai and Pasir Gudang.

Well, what do you expect? Even Pasir Gudang which is the fortress of Johor MB DS Mohamed Khaled Nordin had its majority of over 20,000 being slashed to just over 900 in the last general election.

Tiring la writing about the chubby boy....as if he pays me for writing all these.

Jazlan, if you are reading this, my advice is.....you better slim down a bit man. You are beginning to look like a fat towkey, okay.