Formula on how to handle Dr Mahathir

This morning, I watched the latest speech by former PM Tun Dr Mahathir Mohamad at Apanama's

The handsome old man is still as good as ever. Witty, sharp and smart. Cheeky too. 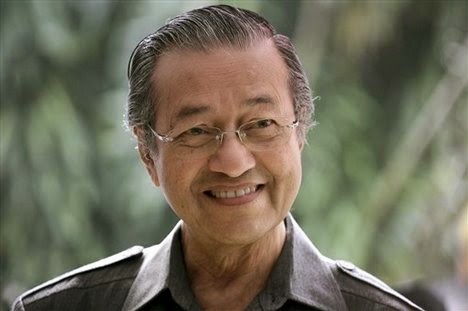 Sometimes I find it hard to believe that he is almost 90 years old.

Honestly, I don't think Najib and his people know how to handle the Dr Mahathir's rebellion.

You cannot smack down a 90-year-old man, okay.

You do that and people will say you and your gang are bullies.

Just imagine this; you walk down the road and you see someone beating up a 90-year-old man.

What do you think?

Does it matter whether the old man is the one who started the fight?

I think that any decent people will try to help the old man.

How can anyone beat up a 90-year-old man, right?

But some in the Najib's camp think otherwise.

This is by Tun Faisal Ismail Aziz;

If I'm not mistaken, Tun Faisal used to be the head of Umno's cyberwar effort before the last general election.

When I read what he wrote about Dr Mahathir, I told myself that, now I know why Umno and its BN allies lost the cyberwar in the run-up to the last general election.

For me that's not how to handle Dr Mahathir's criticisms.

Using words such as "auta" on the almost 90-year-old former PM, who is beloved by millions in this country and around the world will not make Najib's situation any better.

This is not a matter of who can outshout the other.

If you may noticed, Dr Mahathir never try to outshout his opponents.

The handsome old man knows how to play this game.

The more Najib's people attacked him, the more people are going over to his side.

Rather stupid of them, isn't it.

Well, I actually have a formula on how Najib's people should handle Dr Mahathir.

But I'm not telling.

I have stopped giving free advice to these people.

Might as well la aku buat macam ni.
Posted by Annie at 23:11