Listen to your mother...especially if she is garang

Got a call from my mother earlier today.

She was not happy with me.

She said her colleague had told her about a blogger who went around insulting everyone.

Immediately she knows it's me.

Her colleague, however didn't know it's her daughter.

My mother is a very busy lady, but she took the pain to check this blog this morning and she said to her horror found out that her intuition was correct.

She  said my last three postings were all about insulting others,

First I insulted the Chinese,

then I insulted the Malays,

and the last one I insulted the Kelingons


My mother told me to cut it out.

I just kept quiet when my mother is angry with me.

My mother is very garang, okay.

Well, I feel that I was merely stating facts in those postings.

Freedom of expression, what.

Most Chinese do indeed will believe in anything that Guan Eng told them and will vote anything that DAP put as their candidate in an election.

The Malay men are indeed quite weak when facing a pretty girl. They get stupid when it comes to girls, especially those packaged nicely by Chinamen.

Okay, the Kelingon one was just a joke okay. But I think the Kelingons will not attack Earth and trigger an inter-galactic war just because I did that posting.

Kelingons after all have some sense of humor....unlike some Earthlings of certain
race, who like to get angry very easily. 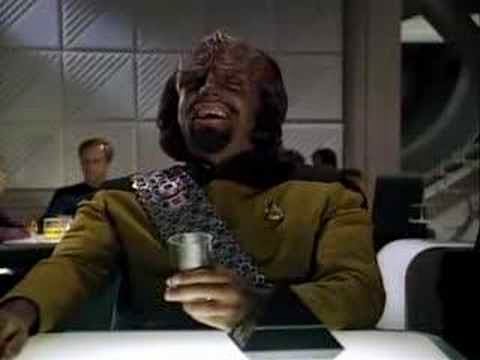 See, Kelingons can laugh and be merry.

Anyway, I think I have to abide by my mother's warning.

Don't want to upset her too much.

So, tonight I am going to just play this song, mentioned by that very rajin commenter LOL in one of his numerous comments,