I was at Dataran Merdeka yesterday.

It happened that I was to attend to some work nearby and since I was already there, I decided to have a look at the Pakatan's anti-GST rally.

The first thing that strikes me about the protesters was that they were almost all Malays  and that the majority were Pas supporters.

Quite a number of them brought their children, including babies. 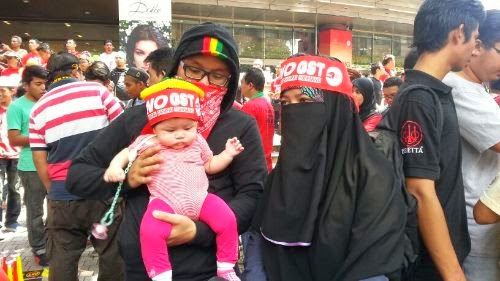 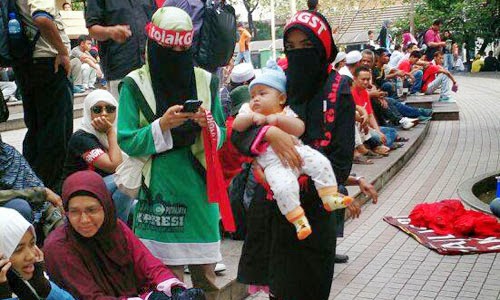 Crazy women. What are they trying to achieve by bringing along their babies to a potentially violent rally?

Is that your kind of jihad or something?

I casually talked with some of them, and therefore can confirm that this report was true,

Most participants don't know what GST is

So, Info minister Sabery Chik, what the hell are you doing? Can you please do something so that the people can understand the GST better.

It's embarrassing to know that a lot of Malaysians are so dumb that they are protesting against something that they don't really understand.

The almost all Malay protesters were the first to arrive at Dataran Merdeka.

There were not many policemen there. No FRU or water canon there either.

The police retreated to the sidewalk immediately after the protesters arrived in numbers.

So much for the garang Home Minister DS Ahmad Zahid Hamidi. 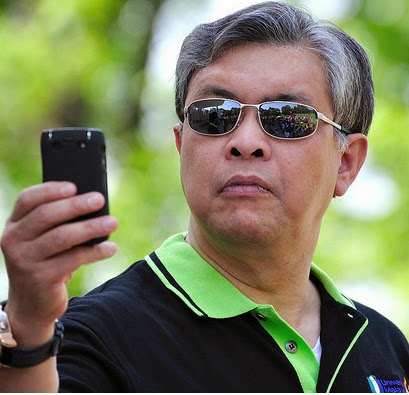 Zahid, did those protesters break the law? Isn't it the police job to stop people from breaking the law?

I think, after yesterday, I rather have DS Hishammuddin Hussein back as the one in charge of security, especially after his good performance in handling the MH370 tragedy.

There was a group of Chinese carrying DAP flags who arrived quite late along with pro-Pakatan NGO members such as Himpunan Hijau and such. Most of the non-Malay protesters were in this group.

They probably only started moving to Dataran after it had been confirmed that police are not going to stop the protest.

I am quite sure that they would not have gone to Dataran if violence broke out between police and the mostly Malay protesters who had arrived earlier.

Anyway, the speeches were the usual Umno bashing type and quite repetitive.

Anwar, for instance, mostly went around bitching about his sodomy conviction. How Umno conspire against him, fixed him up, get the judges to convict him etc.

At one point there was a fistfight and mineral water bottle throwing incident involving a group of protesters affiliated to PKR and Pas Unit Amal members.

You can watch the incident here,

Well, the rest of the protest was rather boring.

When they started to disperse about 4.45pm, I walked a short distance with my colleague who was with me to the nearby Central Market for a drink.

I had air asam boi while my colleague had teh O ais.

After that we took the LRT at the Pasar Seni station and back to our office.

P.S, in case you want to read the Pakatan's version of the rally, you may read it  at the MCA-own DAP supporting newspaper The Star here, Huge turnout as anti-GST rally ends peacefully
Posted by Annie at 09:50