Today I saw in the newspaper that PM DS Najib Razak said the government will not bring back the repealed Internal Security Act.

I didn't read the whole story.

Just read the headline as I stood at the newsstand of a 7-Eleven shop. I am on the road and got no time to read newspapers properly. Not even on the internet.

Personally, I think Najib is doing the right thing.

I never like ISA as I have never been comfortable with the concept of detention without trial.

It's just not right.

I know, in the US they got the Patriot Act while other countries also have such preventive laws. But, why must we be like them?

We are better than them.

Singapore still have the ISA, but I don't think Singapore should be the right benchmark for us all.

In fact, we have always been more democratic then them.

I know, some of my friends want the ISA back, but I disagree.

We must move ahead and improve ourselves instead of wanting to rely on an instrument of power from the past to safeguard our security.

Enforcement of laws needed to be tighten and that should be the priority instead of reviving the ISA. 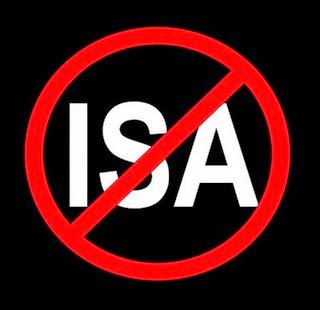 What? How to stop all those terrorists?

Errr....just shoot them all la. How about that?

I am sure we can set-up an execution squad to do the job.

Why bother to catch them and all that? Troublesome only leh. Pakatan people always complain about ISA anyway. It has become their "modal politik".

So, we just shoot them, okay or not?

Well, once they were dead, they are no longer threats to the country, isn't it?

What? How to stop those who instigate racial disharmony such as by lying that certain ethnic groups were being treated as second class citizens and such, just to win their votes?

Nope, you don't revive the ISA for that. That's an archaic draconian law. Isn't that what they said?

Well, I'm leaving it at that.