Debate of the handsome and macho guys


What good will it do?

Will it improves Malaysian football?

I prefer people to reason things out instead.

People tend to get hurt in debates....emotionally.

It's because the loser will come out looking like an idiot, okay.

That's the way it is with debates.

We the audience.....those supporting the winner get to be entertained, while those who support the loser get to gnash their teeth in frustration and humiliation...more enmity there.

Anyway, as a Johorean, I'm supposed to support TMJ, but in this case, I don't think the prince can win.

I have seen KJ debates.

He is really outstanding.

Remember when he had that debate with Ambiga of Bersih fame?

He turned her into a big lump of stuttering fat jello.

You can watch it here,

See, not even Ambiga can match KJ in a debate despite her reputation as a lawyer....a former Bar president, some more.

I really wish TMJ had not made that challenge.

The prince should just let JDT's success on the the field do the talking for him.

Still. now that everyone is set on it, I hope KJ will not go all out at the debate.

Honestly, I prefer TMJ to challange that loud mouth Nazri Aziz to a fist fight instead.

Remember that Tourism Minister who wanted to whack TMJ?

I would love to see him got smacked by TMJ.

I'm very sure TMJ can win that one.

And fist fight is more fun to watch than a silly debate....I think.

Well, what is done is done.

At least it will not be too boring to watch KJ versus TMJ.

Both guys are handsome and macho, okay. 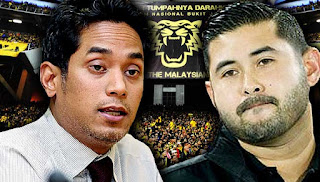 Unlike the other debate - Lim Guan Eng versus Rahman Dahlan