Woken up earlier by the buzzing of my phone.

It's a wassap message from my beloved.

and a link to this story


I was at first very happy to receive a message so early in the morning from my beloved, but then got irritated as I read the story.

This Halimah Sadique really don't know how to keep her mouth shut.

Always want to talk one, this woman.

Limah, you don't know ka that if you talk like that, the more people are going to believe in the stupid gossip.

So slow la you.

And I don't know why Bernama, as the national news agency kept harping on that story.

Nothing better to do, I think.

Who is this son of Mat Aziz anyway?

He is the one who started all these rumours


I know la his father is a State assembly speaker and former MP, but why so many people jumping around because the boy said some people were plotting to topple MB DS Mohamed Khaled Nordin?

Mat Aziz, you don't want to slap your son ka?

You always garang with other people, but with your own son can't shut him up ka?

Why were you letting your son going around rumour mongering like that har?

Tell him to get a decent job and do real work to earn a living, can or not?

Honestly, I think if his son continues making up stories, Mat Aziz may likely be implicated as part of a plot to make Johor politicians jumping around like monkeys.

Really. This is all really stupid.

Can't these people just do their work instead of fooling around with intrigues like in some Korean drama?

The general election is just about two years from now and they are all still fooling around.

I was told Khaled has started moving on the ground, which is good.

Why can't they just help him, instead of getting all excited about some stupid gossip about him?

This is such a waste of time.

Bernama, you all don't want to ask Razali Ibrahim ka after this?

PS : Limah, can you slim down a bit har? You are getting quite chubby, okay. 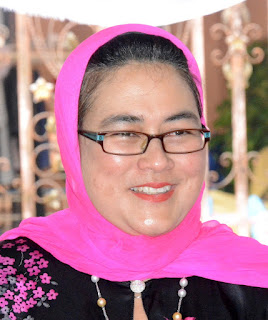 Not very pretty like last time lar.
Posted by Annie at 08:19