Redha and a little story about KJ

Since there are people who went around calling me a liar and such, don't take my words for it.


That's what I appreciate most about it.

It didn't try to "glamourise" the whole thing like so many other movies about people with autism.

It's not about the few high-functioning talented kids with autism but instead the normal ones who are in the majority and the struggles of their parents and loved ones.

Yes, I also hope that more people will watch the movie so that they can understand more what autism is really all about.

Meanwhile, there's this story related to autism about KJ which I think you all may want to read, 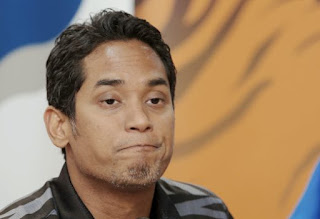 Overwhelmed with emotion, Khairy opens up about son, Timor Abdullah
KUALA LUMPUR: An emotional Khairy Jamaluddin admitted that reading Barry M. Prizant’s book, titled “Uniquely Human” was an eye opener for him, and the book brought him closer to his second child, Timor Abdullah.

At a book review program in Petaling Jaya yesterday, the Youth and Sport Minister said that Prizant’s book on autism made him realise how special his child was, in ways that he never saw before, according to a Malay daily.

“This book changed my life. It changed how I approached my own son and how to completely understand him without trying to change him to be like other kids,” said Khairy.

Khairy, choked on emotion, stressed how important the book was to him, which he said highlighted ways for him to empathise with his special and unique son.

He said, “I am sorry for being a bit emotional today about my son, but I didn’t get why he was that way.

“But this book taught me to see things through his point of view and understand his feelings.”

Married since 2001, Khairy and his wife, Nori Abdullah Badawi have three sons, Jibreil Ali, 9 years old, and Timor Abdullah, 8, and Raif "Leo" Averroes, who is a little over a year old.
Read More : http://www.nst.com.my/news/2016/04/139675/overwhelmed-emotion-khairy-opens-about-son-timor-abdullah
Posted by Annie at 10:34