Had lunch with an old friend yesterday.

He's the leader of my team which helped defended Johor in the last general election.

We actually had lunch at a hospital.

There's a restaurant there.

He was there looking after his wife who was warded after a surgery.

The guy is a very good husband.

He said his wife was recuperating well.

As usual, we talked about all sorts of things including of course politics.

It's now about two years before the next general election.

I remember that around the same time in the run up to the last general election, the Johor BN/Umno machinery swung into full gear, preparing for the poll.

My friend and me were doing our parts as best as we could at that time.

The preparations had started early because of the BN's poor performance in the general election of 2008.

It was not so bad in Johor as BN lost only one out of 26 parliamentary and six out of 56 state seats but the then Johor MB, TS Abdul Ghani Othman had rightly predicted the impending Chinese tsunami.

We knew then that Johor, with its about 40 per cent Chinese population will be hit really hard.

Among the things that I did at that time was contributing ideas and writing a bit in the BIGCAT blog which focused mostly on Johor politics.

The blog was originally operated by my friend Ai and later handed over to another friend, Tinsel.

My blogging captain Rocky among others acknowledged that the blog correctly forecasted the Chinese tsunami which hit Johor on polling day in these posts,

Unfortunately the blog has now more or less been mothballed.

Anyway, my old friend at that time had a much heavier task.

He played perhaps the most crucial role in the overall Johor BN/Umno preparations for the election.

I asked him yesterday what was perhaps the most important preparation done at that time.

"It's probably the visits to the kawasan peti undi (polling areas)," he said.

Ghani actually started his grassroots visits just several months after the 2008 general election but those were on an ad-hoc basis.

They were properly structured two years before the 2013 polls with Ghani from then onwards spending most of his weekends visiting the polling areas.

It's a very tedious work as there are over 1,000 polling areas in Johor.

Ghani and his team visited every single one of them, meeting people, collecting feedbacks, solving local issues, doing follow-ups on anything more to be done, etc.

The visits also boosted the morale of Johor BN/Umno people on the ground. 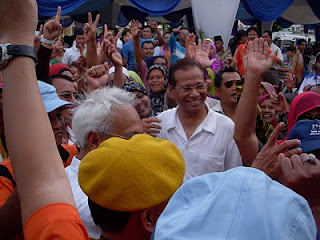 It's part of a strategy which empowered the grassroots as they face the election.

I recently wrote a bit on the outcome of the strategy here,

As for 2013, Johor was hit hard by the Chinese tsunami, yet BN still retained its 2/3 majority in the state assembly and lost only five of the 26 parliamentary seats. It should be noted that about 40 per cent of Johoreans are Chinese. Johor Umno's dominance was however still largely intact with an estimated 83 per cent of Malay electorates voted for the ruling coalition.Ghani, who was ending his political career at the general election made the ultimate sacrifice of becoming the first Umno leader to contest in a Chinese-majority constituency. He was requested by PM DS Najib Razak to contest the Gelang Patah seat against DAP supremo Lim Kit Siang in a brave but futile effort to stop the Chinese tsunami.

However, the current Johor BN/Umno leadership doesn't seems to employ the same strategy.

The last time I checked about three months ago, there was no lawatan peti undi being planned yet.

Maybe it's not fancy enough.

Hopefully, Johor BN/Umno has a better strategy this time around.

Anyway, I think I will write more about my experience during the 2008-2013 campaign in Johor.

Who knows, maybe something good may come out of doing it.

I think that's better than me bitching about some stupid nonsense or quarreling with very clever bloggers who seem to know everything without even going on the ground.
Posted by Annie at 17:36