Prayer for earthquake victims in Kyushu and elsewhere

This is the first picture I ever took from a plane, 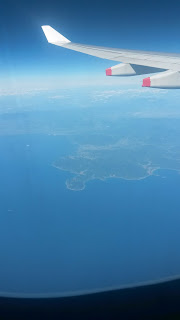 It's from my last trip to Japan.

If you look carefully underneath the plane wing, you can see the land.

I took the picture as it was my first sight of Japan on that trip.

Two days ago Kyushu and other smaller islands in southern Japan were hit twice by powerful earthquakes.

Scores died and the damage was quite extensive.


I felt something about it especially because I know someone from Miyazaki, a town in Kyushu.

The guy is not in Japan at the moment but his family and loved ones were there.

However, I did get through to another friend in Tokyo.

He said the tremor of the earthquakes were felt in the Japanese capital.

He was also concerned about our friend, particularly his family and loved ones.

All I can offer was a prayer that they and the others in the affected areas are alright or not suffering too much.

What happened somehow reminded me of the terrible

I was in Chennai, India when it happened.

I remember the outpouring of sympathy for Japan at that time.

My mother even put the Japanese flag as her Facebook profile photo for awhile as a mark of respect for the victims.

Scores of people I know did the same.

Thankfully, the disaster this time was not so bad.

Meanwhile, half a world away in Equador, over 70 people died in another earthquake early this morning.

My prayer for the people there too.

(Note: Japan made up just two per cent of the world's land mass but endured 20 per cent of recorded earthquakes)
Posted by Annie at 22:10